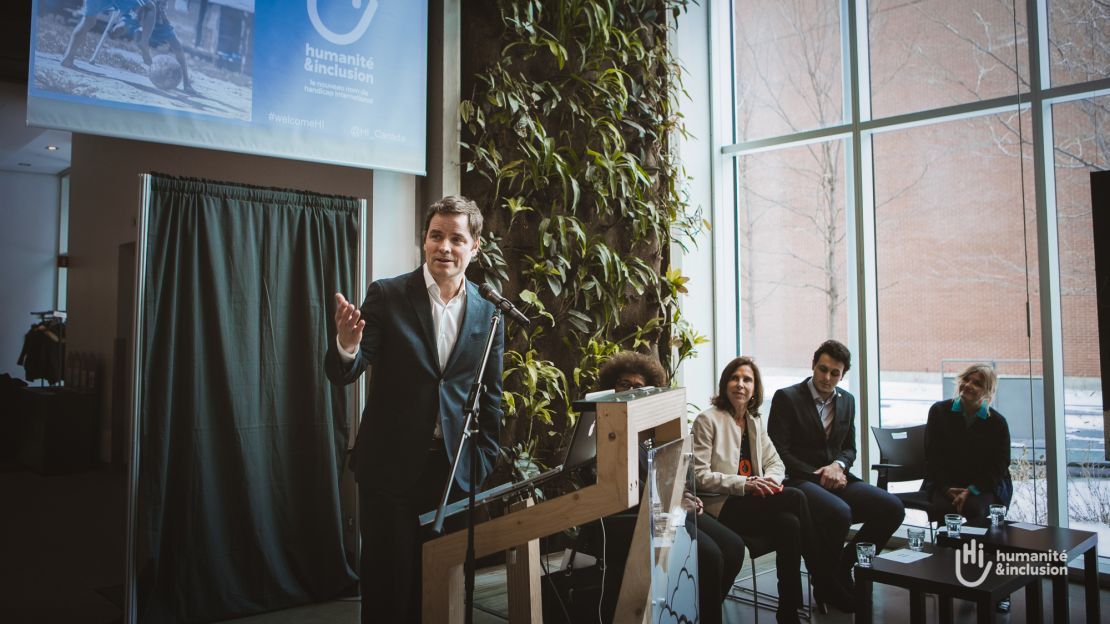 Official ambassador in Canada for Humanity & Inclusion, actor Anthony Lemke takes on the responsibility of helping to raise Canadians’ awareness of HI’s efforts and goals around the world; he visits regions affected by the devastating use of explosive weapons where HI intervenes, and he assists in lobbying for reducing the impact of armed conflicts on innocent civilians.

“As with many first generation Canadians, I recall the horrifying stories of those in my family who were forced to flee their war-torn homelands. But they were the lucky ones who made it to safety. Many didn’t. Upon discovering the incredible work that Humanity & Inclusion was doing, I knew I had to get involved,” commented Lemke. “The impact that HI’s humanitarian response is having on individuals who have been injured, maimed, or displaced in devastated regions such as Syria, Iraq, Yemen or Republic of South Sudan is humbling. I’m completely honored and committed to doing what I can to help raise awareness of this extremely important cause.”

A fixture on Canadian screens, Lemke has a deep and diverse collection of credits to his name that span over 15 years as a leading actor in the Canadian film and television industry. Most recently, he has a lead role in the SyFy Channel’s hit series Dark Matter which airs on Space TV in Canada and was renewed for a second season.  The show screens with SyFy in 83 territories around the world including France, Italy, England and Germany and each week during it’s first season it continued to rank in the top rated spots. Other projects in his prolific career include the hard-driving Detective Sergeant Brian Becker in CTV’s The Listener; a two-season arc on Bravo’s award-winning cop drama 19-2; as well as numerous multiple episode arcs and guest star appearances on shows like the sexy, supernatural series Lost Girl, the absurd college-comedy Blue Mountain State, and the hit-cop drama Flashpoint. His French language productions include regular and recurring roles in Les hauts et les bas de Sophie Paquin, Mirador, Mémoires Vives and 30 Vies. Anthony is also a graduate of the McGill Faculty of Law, holding degrees in both common and civil law.

The tiny Southeast Asian nation of Laos has the terrible distinction of being one the most bombed places on Earth. During the Vietnam War, the United States dropped more than two million tons of ordnance on the country, more than all the bombs dropped in Europe during World War II. That number includes at least 270 million cluster munitions, up to 30 per cent of which failed to detonate. Today, more than four decades after the last bomb fell, people are still being maimed and killed by the unexploded ordnance (UXO) scattered throughout Laos’ forests and fields.

"What struck me about the situation in Laos is that for most Canadians, me included, the Vietnam War is a war from the history books. We don't really think about it anymore," declared the HI Canada ambassador. “It's been over 40 years since it ended. But people in Laos are still getting killed and maimed by that war today.”

Visit of the Dark Matter set

On March 21, 2017, Anthony Lemke gave a private tour of the Dark Matter set to a large donor who had the chance to watch the shooting of her favorite actor's TV series in recognition of her generous gift. She spent a wonderful time discovering what's going on behind the scenes and meeting the crew of the series. Thanks to everyone's commitment at the studio, the privileged guest really felt like part of the team!