Explosive weapons including landmines and cluster munitions continue to kill and injure civilians in countries all around the world. Humanity & Inclusion helps the victims, decontaminates lands and prevents accidents. The association also stands against explosive remnants of war (including cluster bombs), and their use in populated areas, and against other smaller weapons. 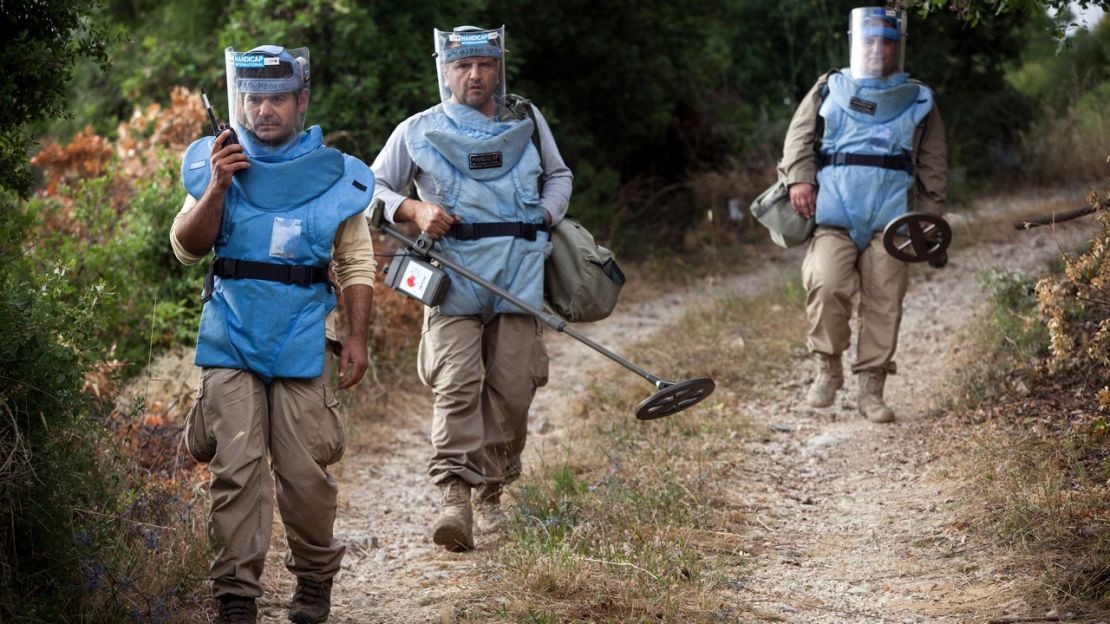 For more than thirty years, Humanity & Inclusion has repeatedly emphasized this: the count of victims of a war does not stop at the end of the conflict. For three decades in Cambodia, and now also in Iraq, Libya and Syria, scattered weapons, landmines, cluster bombs and other explosive remnants of war, used especially in populated areas, will continue to to make victims, mostly civilians.

Over half of the world's countries are affected by contamination from landmines, cluster munitions and explosive remnants of war.

These weapons can lie dormant for many years, claiming victims long after a conflict has ended. They are a significant cause of disability, instilling fear in whole communities, deepening poverty and acting as a lethal barrier to development.

Faced with the devastation caused by antipersonnel landmines and cluster munitions, Humanity & Inclusion soon realised that medical care alone would not be enough. We therefore made a commitment to work on all levels to help mine victims and their communities lead independent lives.

Over the years, Humanity & Inclusion has evolved into the world's most comprehensive mine action organization.

We prevent accidents by clearing weapons including landmines and cluster bombs, and educating the local population about the risks. We also help survivors back into society through artificial limb fitting, physiotherapy, counselling, inclusive education, income-generating activities and sports.

Humanity & Inclusion was created in 1982 in response to the horrific landmine injuries suffered by Cambodian refugees. Soon, we realised that action needed to be taken at an international level to ban these indiscriminate weapons.

Humanity & Inclusion played a key role in founding the International Campaign to Ban Landmines, for which we were jointly awarded the Nobel Peace Prize, following the signing of the Mine Ban Treaty in 1997. We are a founding member of the Cluster Munition Coalition, and actively support the Convention on Cluster Munitions, which came into effect on August 1st 2010. We are also a founding member of the International Network on Explosive Weapons. Humanity & Inclusion is also a founder and co-ordinating member of Landmine and Cluster Munition Monitor, which monitors these two international treaties and produces annual reports on their implementation.

Humanity & Inclusion calls on the citizens of Canada to say NO to anti-personnel mines and cluster bombs, and to stand together against the use of explosive weapons in populated areas, another example of injustice and non-compliance of conflict. Sign the international petition.

For more ressources on conventional weapons and arms, click here.