Two decades ago, the adoption of the final text of the Ottawa Mine Ban Treaty marked an unprecedented diplomatic victory against these cowardly weapons. The treaty led to a fall in casualty numbers, the destruction of millions of mines and a virtual end to their use. Since 2014, however, the use of mines has increased in many current conflicts, with a resulting rise in casualty numbers. 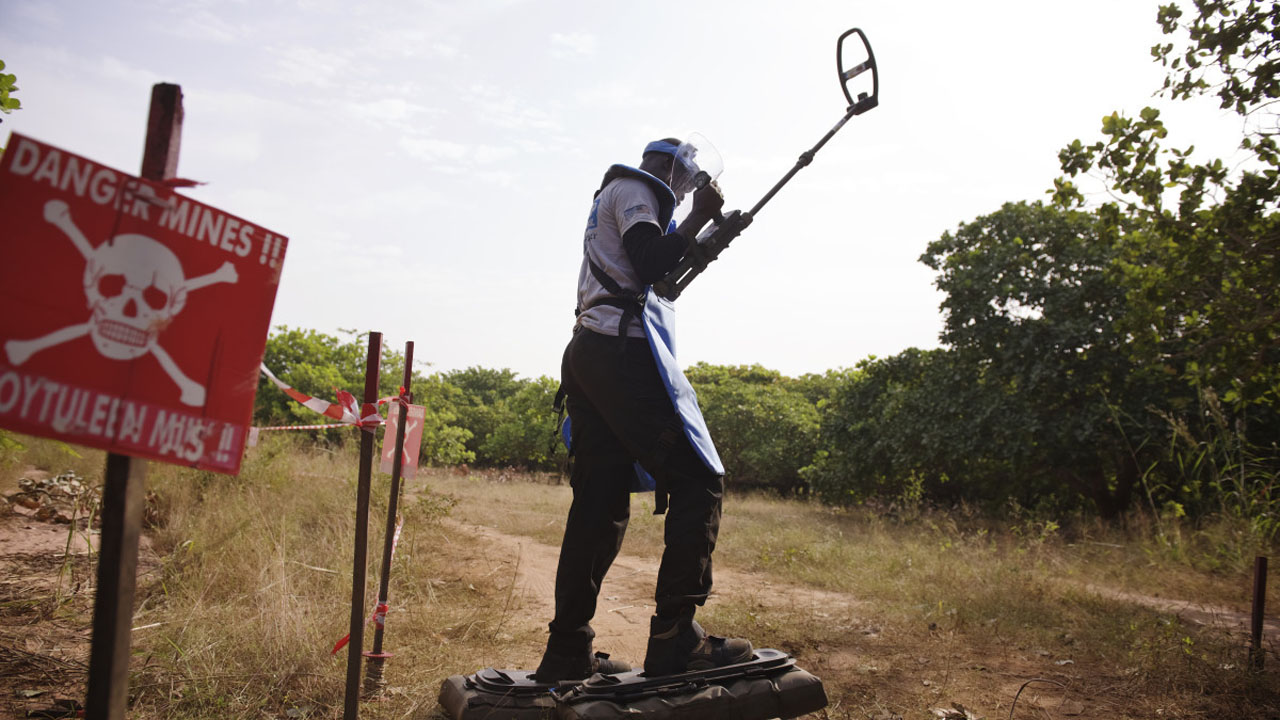 Deminer Souleye using matramine and metal detector on a test field at the entrance of Diagnon Village, East of Ziguinchor. Matramines are a security tool: they are air-blown shoes that spread the weight of deminer body then preventing to trigger landmine | © J-J. Bernard / Handicap International

The anniversary of the adoption of the final text of the Ottawa Treaty is an opportunity to remind States of the need to remain mobilised in the fight against mines in order to bring a permanent end to their use. They also need to ensure that funding to eradicate them is equal to the work that remains to be done and that victims are not forgotten.

The Ottawa Treaty was adopted on 18 September 1997 on the initiative of the International Campaign to Ban Landmines (ICBL), of which Handicap International is a founding member and thanks to the leadership of previous Minister of Foreign Affairs, Lloyd Axworthy. It bans the use, production, transfer and stockpiling of anti-personnel mines and places an obligation on countries to assist victims. A major victory for the States and organisations involved, it was the world’s first treaty to ban a conventional weapon. It was opened for signature on 3 and 4 December 1997 in Ottawa and entered into force on 1 March 1999.

“Mines still present in 63 countries and territories continue to kill and maim. Almost every hour, a new casualty of these weapons is reported somewhere in the world,” says Anne Héry, head of advocacy at Handicap International. “More than three quarters of these casualties are civilians, and a third are children. The use of mines and improvised explosive devices acting as mines increased in 2015. Although clear advances have been made in the fight against mines, our struggle is not over yet. We need to remain vigilant against these weapons and must continue to mobilise States to rid the planet of this scourge and to provide assistance to casualties over the long-term.”

The Ottawa Treaty has enjoyed 20 years of undoubted success. There are currently 162 States Parties, representing more than 80% of the world’s countries; 28 States and one territory have completed their mine clearance programmes since the Treaty entered into force in 1999; at least 2,200 sq.m. of mined land has been cleared, equivalent to nearly twice the size of London; 51 million mines stockpiled by States have been destroyed. The use of anti-personnel mines is now widely stigmatised across the world.

After the treaty entered into force in 1999, there was an initial tenfold reduction in the annual number of casualties from at least 30,000 casualties in the early 1990s to 3,353 in 2013. The vast majority of casualties of anti-personnel mines are civilians (78% in 2015).

However, since 2014, the number of casualties has increased after 15 years of steady decline. The 2016 Landmine Monitor report, which measures the impact of the Ottawa Treaty, reveals that the number of new casualties of anti-personnel mines and explosive remnants of war almost doubled between 2014 and 2015 to at least 6,461 people killed or injured by these weapons in 2015, compared to 3,695 in 2014, an increase of 75%. This is the largest number of casualties reported by the Landmine Monitor since 2006.

“To coincide with the 20th anniversary of the Ottawa Treaty, Handicap International is calling on the international community to implement all of the obligations set out under the Ottawa Treaty: clear contaminated areas to remove the threat to civilians from anti-personnel mines; destroy stockpiles; step up efforts to help casualties and families who are victims of these weapons; call on remaining non-States Parties to join the treaty; and increase funding for the fight against mines and explosive remnants of war.”

This is due to the particularly large number of casualties in conflict zones in Afghanistan, Libya, Syria, Ukraine and Yemen. In 2015, these countries reported the majority of new victims of anti-personnel mines - factory-made or improvised – and explosive remnants of war: Afghanistan (1,310), Libya (1,004), Yemen (988), Syria (864) and Ukraine (589). These five countries alone represented 74% of casualties reported in 2015.