Growing up with a disability in a context of insecurity

Kotime and her mother are lionesses. With help from Humanity & Inclusion (HI), they have braved disability, war, exodus and rejection by their family to fight for a better life. 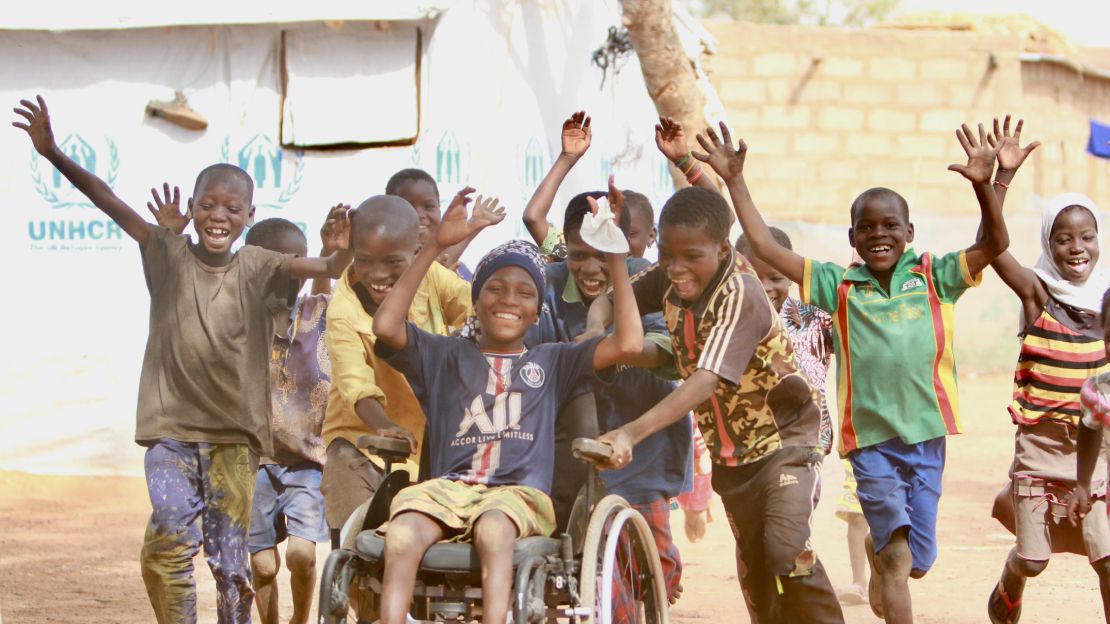 At the age of nine, Kotime suddenly lost the use of his legs. | © Olivier Czar KATONA / HI

When Kotime was nine, she suddenly lost the use of her legs, just as her family was forced to flee their home village in the face of jihadist attacks. HI provided Kotime with care and treatment and assisted her family.

Before it became the target of increasingly frequent jihadist attacks, Kotime's family used to enjoy a peaceful life in their village in the Sahel. Then, in 2019, fate took a turn for the worse. Just as Kotime's condition suddenly deteriorated, the village came under renewed attack. Only weeks before her family fled and took refuge in the north central region of Burkina Faso, she found herself unable to walk.

Mariam, Kotime's mother, has fought for her daughter against all the odds, and the two are very close. Since they met HI’s Inclusive Humanitarian Action project team, their lives have become easier, and Kotime is more mobile.

"Kotime was a burden and our family blamed me"

“I stayed in the hospital for about three months while my daughter was being treated. My in-laws were threatening to disown me because I’d left my home to treat a child who might never walk again. They also said Kotime was not my only child. So, I had to bring her back again," says Mariam, 35. "Then one night armed groups entered our village, killed people, and stole our animals, so we had to leave. It was extremely hard for me because I was pregnant, and I fled with Kotime and her sister in my arms."

Kotime is growing up surrounded by insecurity and poverty

“When we got here, to feed ourselves we sold all the animals we had left. We've been here for a long time. My husband doesn’t work. Now and again, I collect sand to sell, or I go to town to wash clothes to feed my children and buy soap. Sometimes we get help from the government and NGOs. That's how I met the HI team - at a disability awareness event. They spotted Kotime. I’d just given birth. I was carrying my baby on my back and Kotime in my arms. I would take her to places of worship and pray, hoping she might walk again," Mariam continues.

Eleven-year-old Kotime has never been to school

“Kotime has never attended classes. When my daughter was seven years old, the age children start school, the schools in our village were already closed because it wasn’t safe. Two years later, she fell ill, and her lower limbs were paralysed," explains Kotime's mother.

HI mediates between Mariam and her in-laws for Kotime's sake

HI came to support Kotime and her mother several times as they sought to win the family's approval for her rehabilitation.

“To start with, HI’s awareness-raising officer came to talk to us to learn more about Kotime's situation. She referred us to the functional rehabilitation centre, but my in-laws were against the idea. HI did everything they could to convince them and offered to mediate between us. The officer came back to meet my husband’s brothers, but my father-in-law wasn’t there. When he heard the news, he set his mind firmly against it. It took more meetings with my family and a visit from the director of the rehabilitation centre and a religious figure to convince my in-laws! But today everything has changed, at last!” says Mariam.

Kotime couldn’t wait to start her twice-weekly rehabilitation sessions. HI provided her with a manual wheelchair and walking frame, and she was given orthoses by the manager of the rehabilitation centre, who took a close interest in her case. Thanks to her wheelchair, she can join in everyday family activities again. She can even take a few steps on her own. Since Mariam no longer has to carry her around, she feels better in herself and has more time for her large family.

"The wheelchair’s changed Kotime's life - and mine too! It means I can take her everywhere without feeling worn out, and thanks to her rehabilitation sessions Kotime has begun to walk again, although she can’t go far. Life is returning to normal; she can help me with the dishes, and best of all she can go out and play with her friends again. They bring her home after they’ve finished playing. I’m really proud of her," adds Mariam who, against all the odds, has moved heaven and earth to give her daughter hope again!

This testimony was collected by Pascaline Nongbzanga Tapsoba, who is responsible for HI’s community campaigning and inclusion work in Burkina Faso.

Our work in
Burkina Faso
Where your
support helps
Worldwide actions