Healing visible and invisible wounds, one day at a time

In March 2016, the Syrian crisis entered its sixth year. The conflict has torn Syria apart and caused population displacement on a previously unseen scale. More than 4.8 million Syrian refugees now live in neighbouring countries, including some 638,000 in Jordan. For four years, the Handicap International teams, with support from the European Commission (ECHO), have been assisting them in communities and camps. Nowar, Ansam, Noor and Amer tell us about their daily work with the refugees. 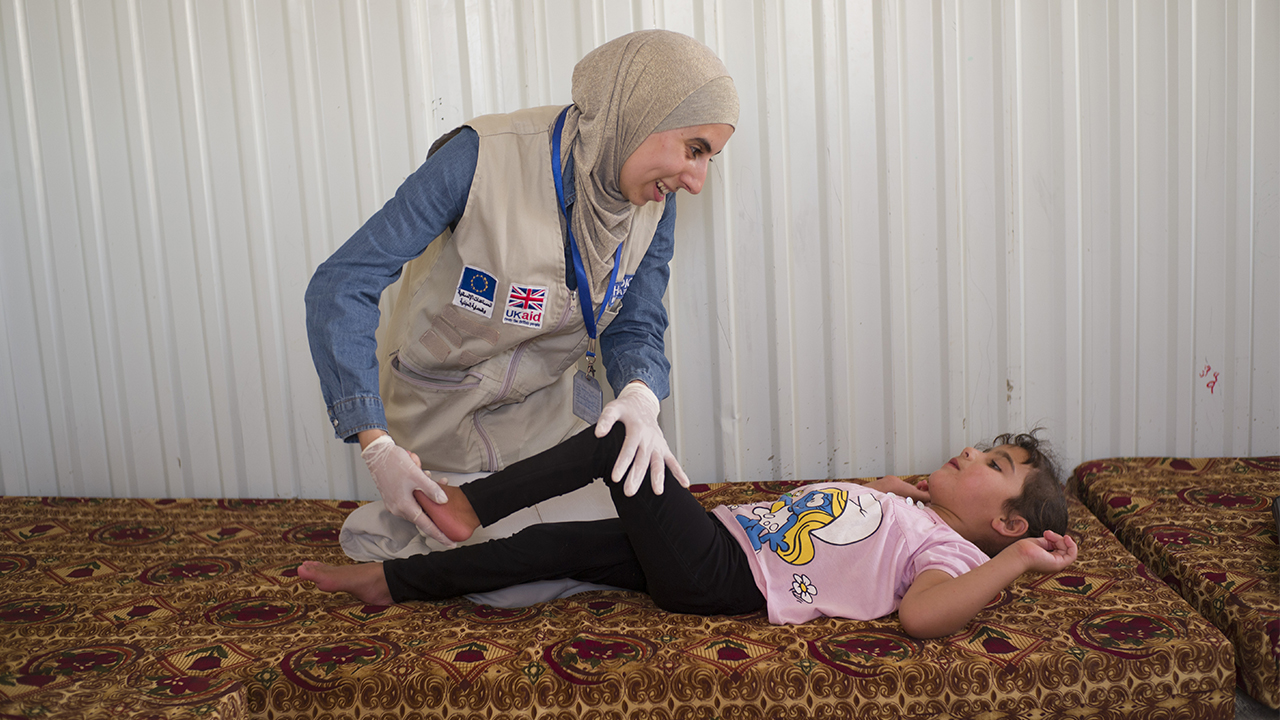 A Sunday morning in spring. Nowar is setting out to work, as she has done five days a week for more than two years. This young Jordanian occupational therapist works in the Azraq camp, where she provides assistance to Syrian refugees. Her view of this humanitarian crisis has changed over the months, so did the way she works with the refugees. Her discussions with them and the occupational therapy sessions she provides have given her a better insight into their daily lives and hopes, and convinced her of the vital importance of Handicap International’s work in the field.

“I feel privileged to work in the camps. It’s not an easy job: you hear some terrible stories, and we are under a lot of pressure. Sometimes it’s hard to handle it all, from one day to the next. But when I think about why I do it, those things don’t matter anymore. Seeing the happiness in the eyes of the refugees after one of my sessions is enough to remind me of how much I love my work.”

“She cried with joy”

Since the start of the Syrian crisis, more than 150,000 people have benefited from Handicap International’s assistance in Jordan. Nowar and her colleagues treat the visible and invisible wounds of the refugees now living in the country. “Everyone has their own story to tell, but some are impossible to forget. One mother, who had a hand injury, was able to cook for her children again after a few sessions. It was so simple, and it might seem trivial, but for her, being able to cook for her family again made a big difference. She cried with joy on that day. It was so moving. I realised how my work can change the lives of these refugees.”

Ansam, physiotherapist, shares her colleague’s opinion. Like Nowar, she has no doubts about how important the organization’s work is in the field. “Working with people who have war injuries, who have left everything behind to find safety, has changed how I see my own life. Our work is really about people. We don’t just help people regain their mobility. We show them that we’re there to help them through this difficult time and that we are not going to forget them.”

More than 25,000 people have already been given rehabilitation care in Jordan by Nowar, Ansam and their colleagues. In addition to the physiotherapy and occupational therapy services it provides, Handicap International also organizes psychosocial support sessions and distributes mobility aids (wheelchairs, walking frames, etc.) to refugees. The organization orthopedically fits the injured and amputees with prostheses and orthoses as well.

Noor, physiotherapist, says: “So many stories have touched me, sinced I started doing this job. But I would say that one of my greatest memories was the day I saw one refugees I was helping, getting up from his wheelchair. I will never forget that moment.” Amer, physiotherapist specialized in prosthetics and orthotics, has worked for the organization since it launched its emergency response to the Syrian crisis. After four years of assisting refugees, he has lots of memories as well, but his first impressions are still the strongest. “I’ll never forget the first time I arrived in the Za’atari camp, and all of these people came towards us, even though we were still in the car. I wondered how it was possible for so many people to be affected at the same time. That’s the moment I realized the scale of the Syrian conflict,” he says.

Since then, the years have passed and the Handicap International specialists continue to provide refugees with as much help as they can. “The organization plays a key role in helping the most vulnerable people,” says Amer. “When people regain their independence and can move around, it opens up a lot of possibilities again. That’s what drives me.”

Handicap International and the Syrian crisis:
In Jordan, of the people who benefit from the Handicap International services, 53% are disabled, 17% have injuries and out of everyone provided with care or treatment by the organization, 17% are children1. Of the most common types of injuries, 40% are orthopaedic deformities, 11% cerebral paralysis, and 9% are brain injuries and amputations. Handicap International works in six governorates of Jordan, via its “mobile” teams who go from home to home, its “travelling” teams, who move from one health center to another, and “permanent” teams, who are present in health centers and hospitals. The teams are composed of physiotherapists, social workers, prosthetic and orthotic specialists, occupational therapists and psychosocial workers.

1 Data for November 2015 – March 2016.
Where your
support helps
Worldwide actions