"I am proud to contribute to solving the problem of contamination in Laos."

Lamngueun joined HI in 2006 as an explosive ordnance disposal (EOD) expert. Today, she manages an 8-person clearance team. She tells her experience: 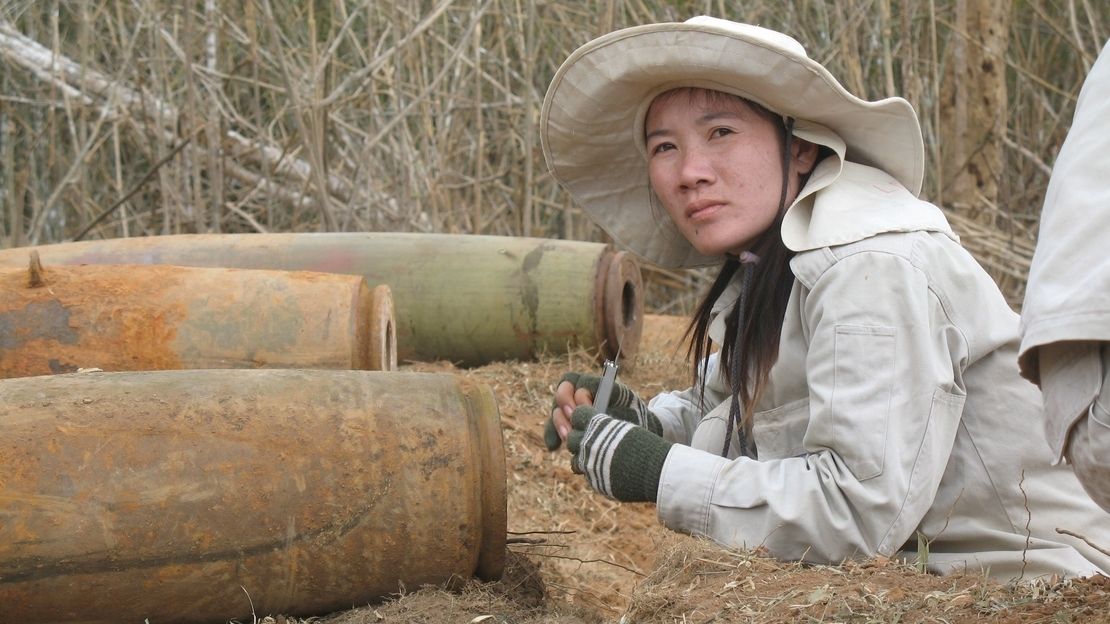 Lamngueun has been a HI explosive ordnance disposal (EOD) expert for 15 years. She manages a team of 8 deminers in Laos; the country most contaminated by cluster munitions.

Hi! My name is Lamngueun and I am 40 years old. I grew up in Phine, a town in Savannakhet province in Laos which is an area heavily affected by unexploded ordnances. I come from a large family – I have 7 sisters and brothers! I now have 3 children of my own.

I am proud to be a female deminer – every day I think to myself how it is a great feeling to demonstrate that the disposal and destruction of explosive devices is not a profession only for men. I am one of the few female deminers to reach the explosive ordnance disposal (EOD) level 3, which means I manage a clearance team and supervise remediation of sites.

Is there any special task that struck you recently?

At the end of 2021, we were clearing an area in Nalaeng village, North Laos, with the women’s explosive ordnances disposal expert team. The contaminated area was all over a hill surrounding the village. As usual, we found a lot of submunitions[1] but not only that.

After 5 or 6 days of work, one morning an operator uncovered a large metallic object while he was excavating. He called me to investigate and identify the finding. We identified it as a Mk82 500 Lbs aircraft bomb[2] laid in horizontal position, around 60 cm below the surface. This is a large bomb very common in the Savannakhet Province (East of the country) but not so common here in the North of Laos where we usually find smaller items such as artillery, mortar, grenades, rockets and cluster munitions. This was an event for the team and an opportunity for the supervisors to share their expertise. They explained how the tail fuse works and how to identify it.

We marked the site where the device was discovered, and the risk area around it. Then, the Operations Chief came to the site to assist in planning the disposal of the bomb. Such a bomb requires a 1.5 Km safety radius around the device. Two days later, the bomb was safe after partially evacuating the nearby village and moving the device to a disposal pit where it was destroyed using 3kg of TNT.

For this, I contributed to positively identifying the bomb, planning the demolition and securing the area on the day of disposal.

What are the key qualities to make a successful EOD expert?

The most important thing is to be always concentrated on what you are doing. As a team leader, I need to take responsibility to achieve all tasks are assigned safely and completed to good quality, as planned.

We are in contact of explosive ordnances almost every day so we have to be alert all the time. A few days ago, we found and destroyed more than 10 cluster munitions and explosive ordnances in one day as we were clearing a rice field in Homphanh village in the district of Houameuang, North Laos!

For this job, you also need to be both physically and mentally strong. Field operations can be harsh. For example, the agriculture land here in Houameuang is mostly on the edge of mountains. We work long hours swinging a 12 Kg detector. Excavating is hard work. Then, at the end of the day, when you think you have finished, we get back to base camp where we have to wash our clothes, help with cook dinner, and complete our daily report.

When and how did you become a deminer for HI?

It was in 2005, when I was just finishing school that I remember seeing that HI was looking for EOD operators. I decided to submit an application to work for the organisation as an EOD expert. The process of applying for the job was not easy – I was lucky to be short-listed but then I had to go through a series of tests; mathematics, reading, medical and physical tests! After all my hard work I found out I passed!

The job started with an intensive 2-month training course. I found myself in a classroom with 25 other young boys and girls. We learnt how explosive ordnances work, what the hazards are, how to use specialist equipment such as a detector, how to destroy an unexploded bomb, how to use a radio or a megaphone, how to provide medical first aid.

I was happy to get a job that helps to protect people from the danger of explosive ordnances. There are many explosive ordnances in Laos. Many accidents occurred. One accident is vivid in my memory: my father had an accident in 1984. A day after he finished office work in the evening, he went to work in the rice field. He dug and repaired the earthen dyke of the rice paddy with his spade. He hit an explosive device and it exploded. He was very lucky as he was not seriously injured. He had to go to hospital for a week.

I have seen my grandparents, parents, children and many people in my community living in fear each day knowing the risks of deadly unexploded ordnances. I am so glad to participate to address the issue.

How do you balance working as an EOD expert whilst having a family?

When HI’s base moved from Savanakhet province, where my 3 children live, to Houameuang in North Laos, it was really difficult. This means I am further away from my family. It takes 1.5 days to travel back home. We have 3 campaign breaks each year, but last year because of Covid-19, there were a lot of disruption and we worked from April to end December without going back home. This was a long time for me. Videos calls help because I can see how my children are doing back home. There are not many job opportunities close to my family and it is crucial for me to provide an income to support them – this is what motivates me to continue such important work.

[1] The American BLU-26, a small aerial dispensed, centrifugally armed, high-explosive (HE), anti-personnel, fragmentation sub-munition that is impact fired is very common in Laos.