“I’ve got my smile back again”

Injured in one of Iraq’s many wars, Sabah had his leg amputated several years ago. When Jalawla was captured by the Islamic State group in 2014, he fled the city with his family. They returned to Jalawla in early 2016. Still traumatised by all he went through, Sabah follows psychosocial support sessions supported by one of Handicap International’s teams. The organisation has also provided him with mobility aids to make his life easier. 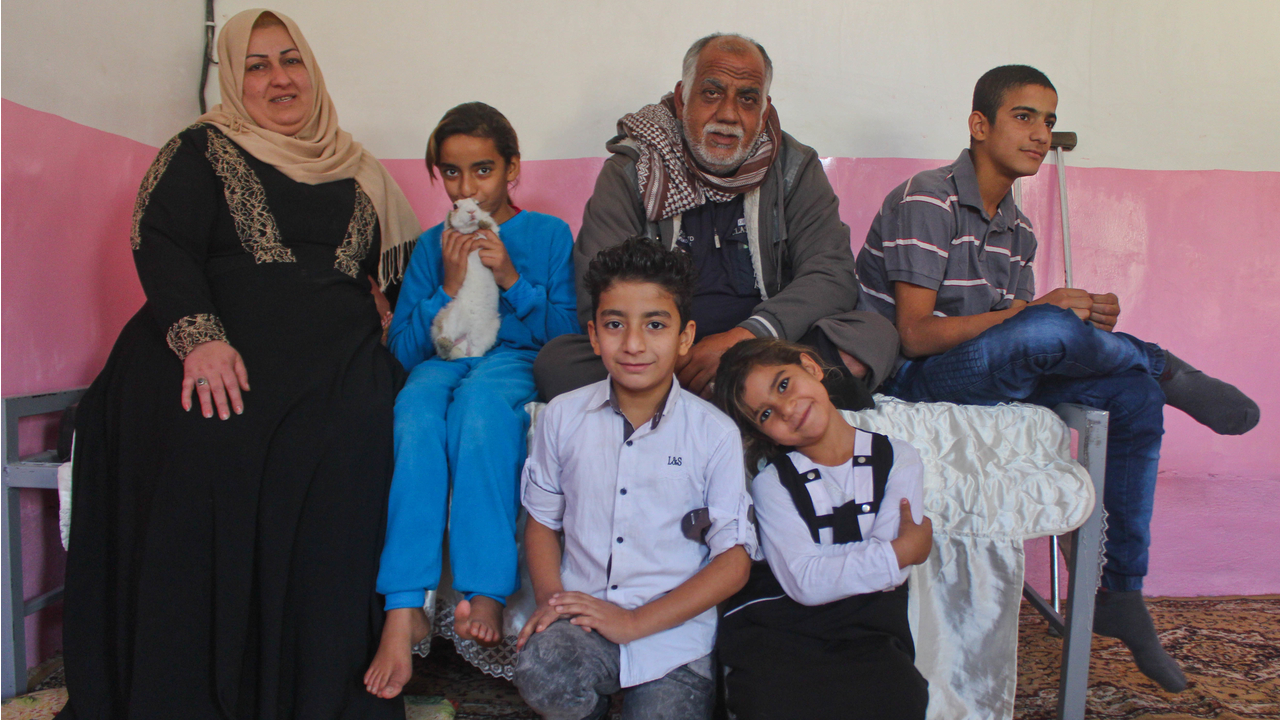 Sabah and his family in one of their two rooms. | © E. Fourt / Handicap International

Today Handicap International’s mobile team is visiting Sabah in Jalawla. The door is opened by a cheerful little girl, holding a rabbit. “His name is Bobby,” she says excitedly as she leads Shvan, physiotherapist, and Awtar, psychosocial worker, into the family’s living room. Sitting on the bed donated by Handicap International, Sabah greets Shvan and Awtar, who have been visiting him for several months now. “It’s great to see him smile,” says Awtar. “A few months ago, he was still depressed. He hasn’t had an easy life.”

In 1987, Sahab was working as a deminer in southern Iraq. The Iran-Iraq War was at its height and his job was to clear the mines laid during the conflict. “One day, we were working and soldiers fired at us,” he says. “We ran and climbed over a wall and I fell on a mine. When it exploded, I saw my foot blown from my body. A colleague put me on his back and carried on running.” When Sabah reached the hospital, surgeons advised an amputation. The accident changed his life and the trauma was difficult to shake off.

Years passed by and Sabah married and had a family. He began to enjoy the little things in life again and seemed to have forgotten his accident, until 2014, when another of Iraq’s wars turned his life upside down again. “When the Islamic State group arrived in Jalawla, I immediately decided to flee with my family. We left at night, terrified they’d kill us if they saw us. We crossed a bridge and a few minutes later a bomb hit it. It was really dangerous, and my amputation made it harder. It was very difficult. We were so frightened.”

Sabah took refuge with his family in another town where they stayed for over a year. They only came back to Jalawla in February 2016. “When we arrived, the authorities warned us we’d be shocked. They were right. I didn’t recognise my house when I opened the front door. Everything was gone. They had looted everything. Thank God the walls were still there. Lots of houses were reduced to rubble, so I can’t complain.”

Since his return to Jalawla, Sabah has been helped by Handicap International. “We gave him a toilet chair and a bed because they had stolen everything and he couldn’t do without them,” says physiotherapist Shvan. “I also worked with the governmental hospital to get him a new prosthesis, better adapted to his needs. Today, I want to check what his walking is like.” The two men head into the courtyard to do his rehabilitation exercises.

A little later, at the end of the session, Shvan and Awtar congratulate him on his progress.

“We’re so proud of you,” says the psychosocial worker. “The organisation has helped me a lot. Life is easier now,” adds Sabah, his spirits lifted. Cheered on by his children, he takes a few more steps then says with a smile: “All this effort, I do it for them.”