Since being accredited as a demining operator in 2006, Handicap International has cleared more than 25,000 unexploded ordnances (UXO) in Laos, the most heavily bombed country, per capita, on earth. Leonard Kaminski, the New Zealand-born chief of operations for Handicap International’s demining program in Laos, answers questions about Lao’s UXO problem and the organization’s efforts to clear these weapons. 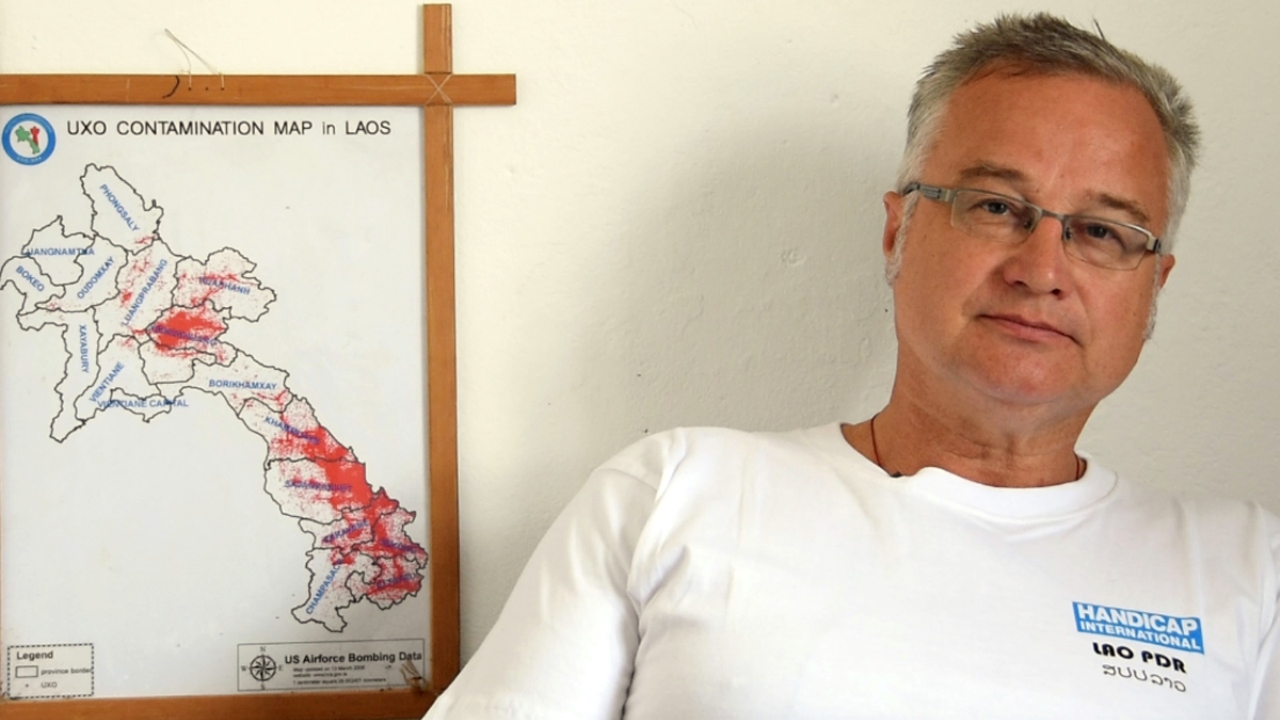 What is the general situation of UXO pollution in Lao?
The American government bombed Laos from 1964 to 1973 during the Vietnam War. More than two million tons of ordnance was dropped. Twenty-five percent of the villages in this country are suffering from the contamination of UXO.
Approximately 48% of UXO cleared in Laos are cluster munitions. Half are categorized as land-surface ammunition (such as mortars), 1% are large aircraft bombs—anything from 250 to 2,000 pounders—and 1% are landmines.
The main concern is the cluster munitions—there were approximately 270 million dropped and the belief is that up to 30% of those failed to detonate. There could be as many as 70 or 80 million still littering the country.

What are cluster munitions and what threat do they pose today?
A cluster munition is a collection of hundreds of small bomblets, also known as submunitions. Aircraft drop the container, the container then opens, and the cluster bombs spin through the air, which arms them. They spread over a large footprint and they're designed to explode when they hit the ground. However, due to various reasons, a certain percentage failed to detonate. It could be the pilot dropped the cluster munition too low for it to arm properly. The bomblets could have hit some soft ground or just experienced a general malfunction due to the design of the weapon.
Those little bombs are the equivalent of sensitive hand grenades littering the farmland and countryside. It’s been about 40 years since the bombing stopped and there's been a lot of vegetation growth. The contamination is still there, but the signs are now very subtle. If someone is working the land, digging it up, or even walking through it, and they knock one of these things, potentially the bomb could explode and kill the person involved.

Can you describe the process HI uses to clear UXO?
In Laos, we have four different types of teams. We have a non-technical survey team, a technical survey team, a clearance team, and a roving team. The first step is to deploy a non-technical survey team to a village or area we have identified as likely having contamination based on an analysis of the historical bombing data provided by the U.S. The team will ask the locals if they have any evidence of UXO contamination. Sometimes local authorities will alert us directly. This team then reports on any findings and we deploy the roving team to destroy those items.
When one or more UXO has been identified, we have what’s called an evidence point. We know that nearby there is likely going to be more contamination. To ascertain the extent of that contamination we send a technical survey team. We make a map of the area around the evidence point and divide it into a grid of fifty by fifty square meter square boxes.  The technical survey team will use metal detectors to quickly scan and sample the boxes. If a UXO is found in one box, that box is colored red on the map. If only a fragment is found that box is yellow, and if nothing is found it is a green colored box. So the idea is to keep searching these boxes until we have surrounded an area with green boxes so that we are reasonably confident that we have isolated and identified the extent of the contamination in that particular area. Once that is done, we then return to the area with the clearance team, which carefully and slowly rescan the red boxes. The roving team will destroy any UXO they find.

How do the deminers find the UXO?
The deminer searches the ground with a metal detector. When he receives a signal, he doesn't know if it’s a bomblet, a mortar, or just a bit of scrap metal. At every signal, he’s required to stop and use his digging tool to find the object so he can identify what it is. If a UXO is located, that's reported immediately.

Can you describe the process of how bombs are destroyed?
The roving team leader will identify the UXO, what it contains, and its fuse mechanism. Then it's his job to come up with a safe plan to dispose of that UXO, communicate that plan, and then action that plan.
Generally we destroy UXO by sympathetic detonations. The team leader places a small amount of C4 explosive on the UXO, attaches a detonator to it, and then withdraws back the required safety distance. While this is going on, other team members with megaphones warn everyone within the vicinity that an explosion is about to occur. We also place sentries out to stop people from entering the dangerous area. Once those sentries are out and the area has been secured, then the team leader destroys the UXO.

Handicap International, in cooperation with the Lao National Regulatory Authority for the UXO/Mine Action Sector, is committed to making the country safe for the generations to come through clearance work and risk education. For the last 20 years, the organization has also been providing direct support to survivors of UXO in Laos and other people with disabilities.