Developments in mine clearance largely reflect recent changes in response environments. Thomas Hugonnier, head of Mine Action at HI, explains how this currently affects our mine clearance operations. 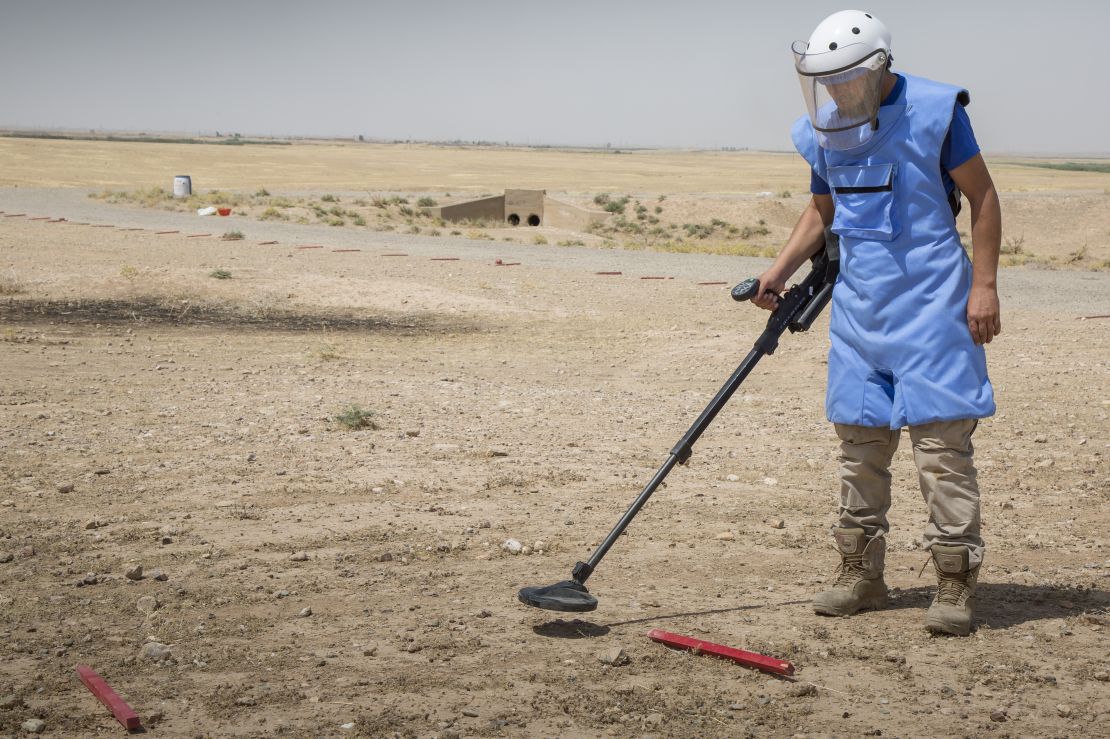 HI’s mine clearance teams clearing explosive remnants of war from fields in a bombed village fifteen years ago, during the US military intervention in Iraq. | © Blaise Kormann/L’illustré/HI

I’m going to start with two very different examples:  in Colombia, we’ve been clearing mines since the start of the year. In this country, we stick to the letter of the Ottawa Treaty[1]. By which I mean, we’re implementing our mine clearance operations in the light of a peace process between some former parties to the conflict: an agreement was signed in 2016 and humanitarian demining operations were launched immediately afterwards, freeing up land, and reducing the number of casualties and the risk of tension between the former belligerents, which might have flared if there had been new casualties. Humanitarian demining has a central role to play in shoring up peace in Colombia. It’s even become a subject of discussion between the government and the ELN (National Liberation Army), which didn’t sign the agreement. Both sides are keen to make a “sign of peace", which could include humanitarian demining, as a way of building trust between them.

Working in countries at war

In contrast, in Iraq, we’ve been implementing demining operations since 2016 in a war context. Iraq was contaminated during the wars of the 1980s and 1990s, and again during the current conflict, which has been marked by intensive bombing and the use of improvised explosive devices (IEDs), which raises new technical but also ethical challenges for humanitarian demining teams.

In fact, we apply a number of principles in our work. We make a particular point of ensuring that local people know that HI is “neutral”. We work to secure the safety of civilians, and never for the benefit of any of the parties to the conflict. This is why we implement our mine clearance operations in areas that are no longer "active hostile zones", that is, where there is no frontline or the fighting has ended. We select these areas based on a careful analysis of the dynamics of the conflict, which enables us to work in stable zones where civilians are trying to get their lives back to normal.

Our second principle is to combat indiscriminate weapons. The main reason HI campaigns against the use anti-personnel mines is the fact that they do not discriminate between military and civilian targets. Similarly, most of the IEDs used in recent conflicts are triggered unwittingly by the victim him or herself, by tripping a hidden wire or opening a door. We consider this type of explosive device to fall within the scope of the Ottawa Treaty, and victims must be protected under the terms of this international convention. IEDs also present us with a technical challenge: our deminers are specially trained in what is known as High Risk Search. No one improvised mine is the same and detecting them is tricky.

The final principle is that HI should work to meet all humanitarian needs in Iraq, with mine clearance being only one of those needs. In Iraq, HI provides rehabilitation care, and post-traumatic, mental health and psychosocial support to casualties of the conflict.

HI is running a campaign called Stop Bombing Civilians and calling on the public to sign its petition in order to pressure States to take action against the use of explosive weapons in populated areas - an indiscriminate practice that mainly kills and injures civilians. At least 43,000 people were killed or injured by these weapons in 2016. When used in populated areas, 92% of casualties of explosive weapons are civilians. Say no to the bombing of civilians, sign the petition.

[1]The Ottawa Treaty bans the acquisition, production, stockpiling and use of anti-personnel mines. The treaty was opened for signature on 3 December 1997. It entered into force on 1 March 1999. A total of 163 States have signed it to date and 162 States are party to the treaty. Under the terms of the treaty, within ten years of ratifying it, the State Party should have cleared all of its mined areas.

Our work in
East Timor
Where your
support helps
Worldwide actions