Shumira, one step at a time

In the corner of a dark hut, ten-year-old Shumira is busy with her make-up bag. A mirror directs thin rays of sunlight onto the little girl's face, revealing cheeks reddened by the mixture of face powders that she has put together. Shumira is getting ready to go and play outside, in the Teknaf refugee camp in Bangladesh. No easy task after years of living in seclusion, due to her disability, cerebral palsy. 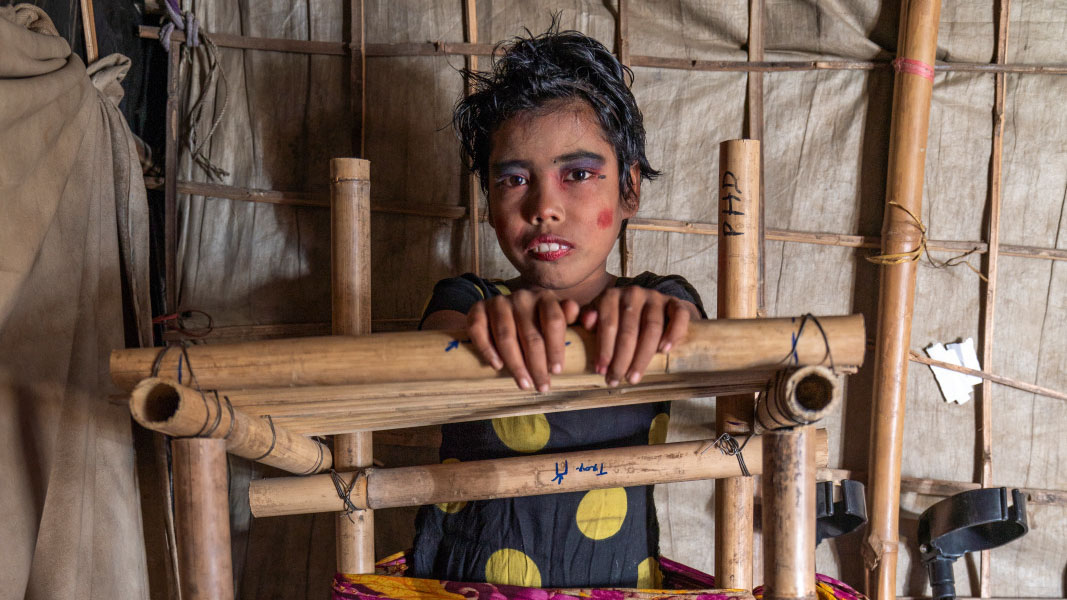 Shumira, 10, has been living with cerebral palsy in the Teknaf camp, near Cox's Bazar, in Bangladesh. | © Abir Abdullah/HI

When she was younger, Shumira began to experience difficulties with posture and movement, which led to a gradual reduction in her activities. Her mother tells us that, in the end, her daughter would spend her days in bed, unable to walk because of the stiffness in her limbs. The days passed and blended together, until an HI mobile team knocked at her door.

A bamboo frame to help her to stand 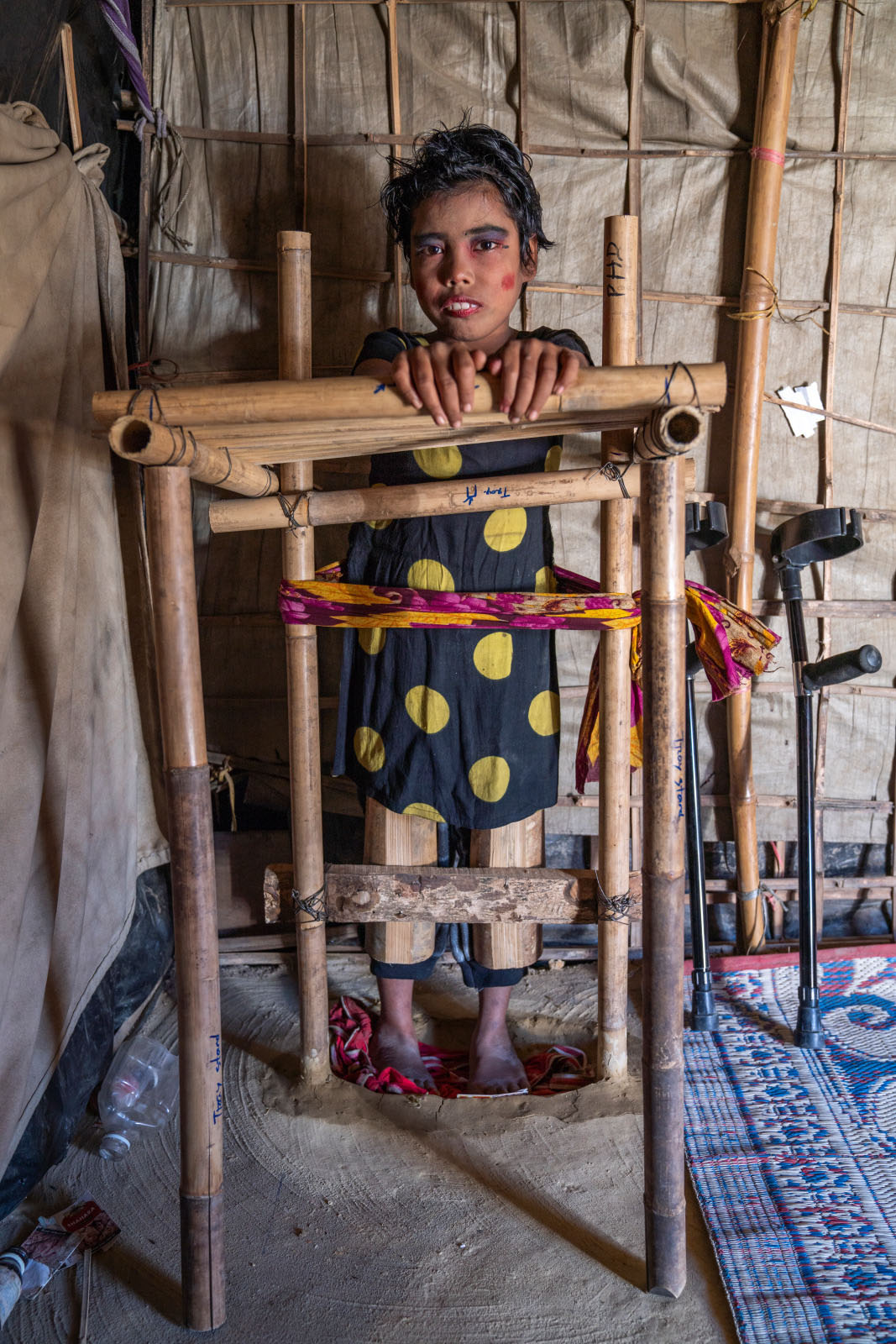 Shumira is able to stand, today, behind her makeshift dressing-table only because of the bamboo frame built for her by HI physiotherapist Mohafuzur Rahman. "I learned how to do it on the Internet. It wasn't all that hard," says Mohafuzur, adding that he asked the family to provide him with the materials he needed to build the orthopedic device. "I wanted to involve Shumira's family in her recovery process", he says.

Now Shumira fastens herself into her bamboo device twice a day, once in the morning and once in the evening. This allows her to play with her make-up collection - one of her favorite activities. This exercise seems to be paying off, since she's beginning to be able to stand up without assistance. "It makes me happy to see her standing up straight and moving. She's even begun to go outside", says her mother, smiling.

Shumira made such good (and rapid!) progress that Mohafuzur decided to give her crutches. But learning to walk with crutches is not always so easy. "At first, I thought I was going to fall; I was afraid", says Shumira. After a few tries, Shumira became more confident and managed to string some steps together. "Now, I'm not afraid to use them, and I felt so good the first time I went outside!", she exclaims. 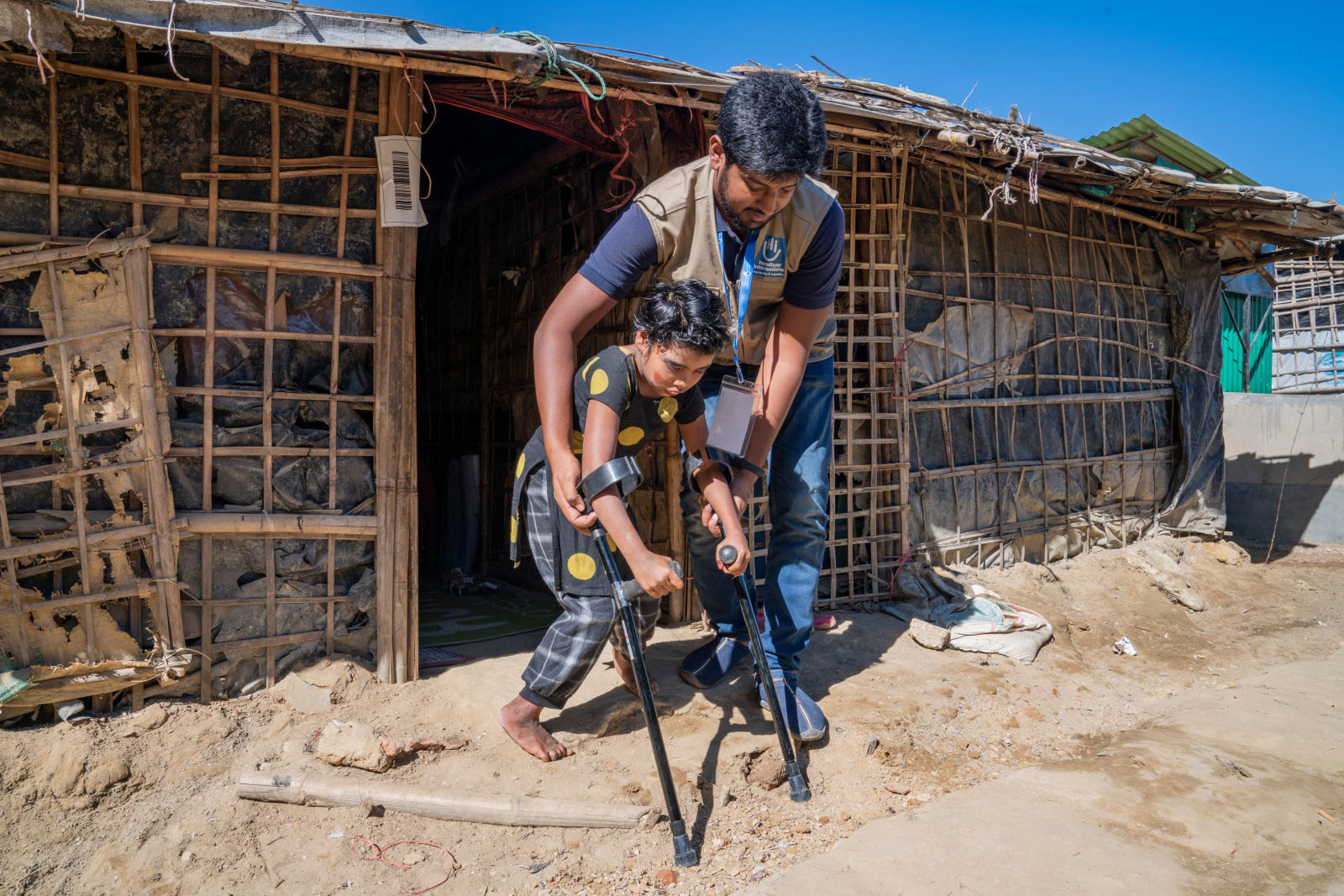 Samira and her physiotherapist, © Abir Abdullah/HI

The physiotherapist visits Shumira regularly to give her rehabilitation sessions. Each time, they practice walking with the crutches together. "I know that Mohafuzur is there to help me." Shumira's progress has been impressive since she met the HI mobile team two weeks ago. But the young girl knows that she must progress one step at a time.

Living in the Teknaf camp

At Teknaf, 274,000 refugees[1] are crammed into makeshift shelters. Many families have been living there for a few years, and many children have been born there. HI has deployed two mobile teams there since the mass influx of refugees in 2017 and also runs other inclusive activities, such as the Growing Together programme, supported by the IKEA Foundation.