Explosive weapons
Colombia
Marta Quintero has been part of HI’s demining operations in Colombia for seven years. She is working for the future of her country with an unerring determination born out of personal experience. 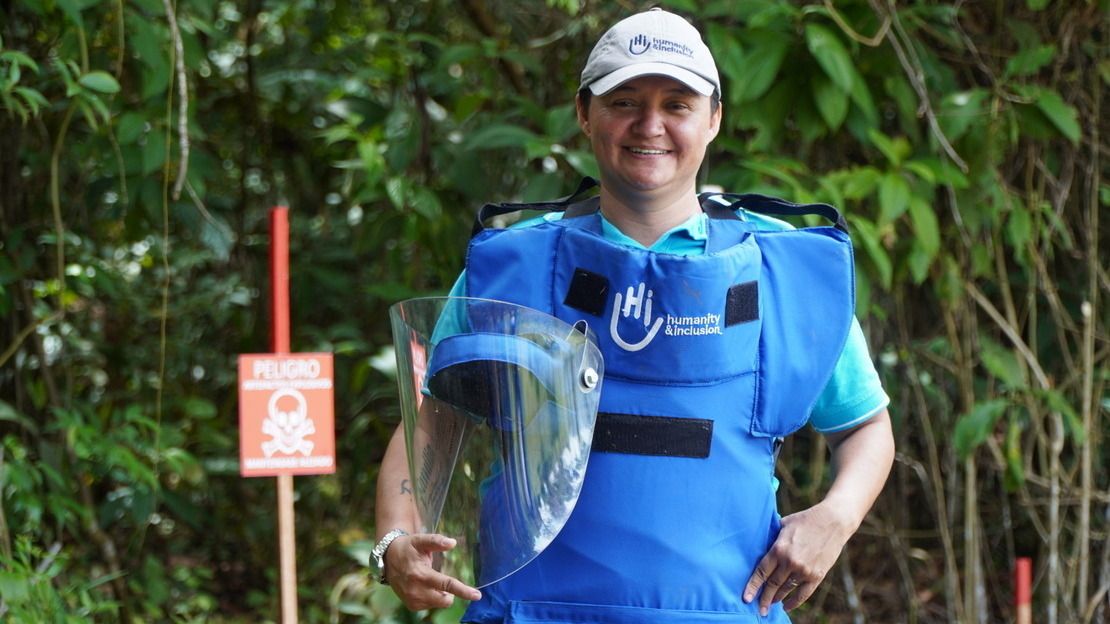 My name is Marta Janet Quintero Diaz and I have just turned 40. I’m from a village in the department of Antioquia, Colombia. I’ve been working for HI for 7 years. I started as a deminer and now I’m the field supervisor for two demining zones.

My life changed forever the day I stepped on a mine

I was 14 at the time. I remember it like it was yesterday. It’s something that marks you for life. It was raining that day. I was with a group of friends and we were playing chase on a path linking the road to my parents' property. Whenever we went there, the adults told us not to leave the path under any circumstances. Suddenly, one of my friends shouted at me not to move. I looked behind me and that's when I saw it. I had stepped off the path as I was running and put my foot on a mine. That day, because it was wet, it didn’t explode.

We stood motionless for at least fifteen minutes, not knowing what to do. I didn't know whether to laugh or cry. I really saw my life flash before my eyes. I knew very well what could have happened to me. We went home and never went back on that path again. Even today, when I tell this story, I’m still affected by it and I get shivers down my spine.

“Many years later, I was part of a team demining that same path. I remembered exactly where I had stepped on that mine when I was 14. And there, between the roots of a big tree, we found seven of them.”

I do the best job in the world

The first humanitarian demining operations in Colombia started in my village in 2012. One day, out of curiosity, I went along to an information meeting. We were shown pictures of devices identical to the one I had stepped on when I was 14. That's when I realised what I wanted to do with my life.

“I was lucky. The mine I stepped on didn’t explode. For many people, that’s not the case. I want to make sure it doesn’t keep happening.”

When I started, I was eager to learn everything. I passed all the demining training levels one after the other. If I was going to do this job, I wanted to be the best. I said from the start that if I didn’t make team leader within a year, I’d stop. And I did. I started as a deminer, then after three months, I became a leader and six months later, I was a team leader. I’ve also got the two certificates you need to destroy explosive devices and ammunition myself.

I wake up every day with the same motivation. Of course, the salary is important because we all have a family and responsibilities to take care of. But believe me, if I were rich, I’d do this work as a volunteer.

The smile of the inhabitants is the best reward

I could have chosen a job where I’d see my family every day, but that wouldn't have suited me. Demining is a hard job – you spend the day on your knees. You work in the mountains for six weeks at a time, away from your home and family. You make great sacrifices. But the reward is worth it.

“When you finish clearing an area, release it back to the people and walk on their land with them, free of fear, you should see their eyes shine and their huge smiles. That is the best reward.”

The day that Colombia is mine-free is the day that I stop doing this job. But even then, I’ll continue demining in other countries.

My motivation is my family. I’m here for them. I’ve got three sisters and two brothers, and since my father passed away, I’ve become the pillar of the family. I’m single and live with my mother, one of my sisters and her two children. After a work cycle, when we have two weeks off, I don't go to the beach or on holiday. No, I go straight home to see my family.

“I dream of a Colombia at peace for my nieces and nephews. They are aged between 3 and 16 and I don't want them to go through the same thing as me.”

The armed conflict in this country was terrible. I lost my father when I was 23 years old. But today, we have to move forward. Many of my colleagues have children, and they all dream of a better future for them. If they are to have the chance to experience a new country, we must all forgive and give the future a chance.