Tirean and Navea, on life and love

A small wooden house along a road, in a small village not far from the Mekong river. A man leaning on a crutch is selling a bottle of water, while a woman is vigorously washing laundry in a bowl. Tirean and Navea were both victims of mines in the 1980s. They are both monitored by the Handicap International rehabilitation centre in Kompong Cham. 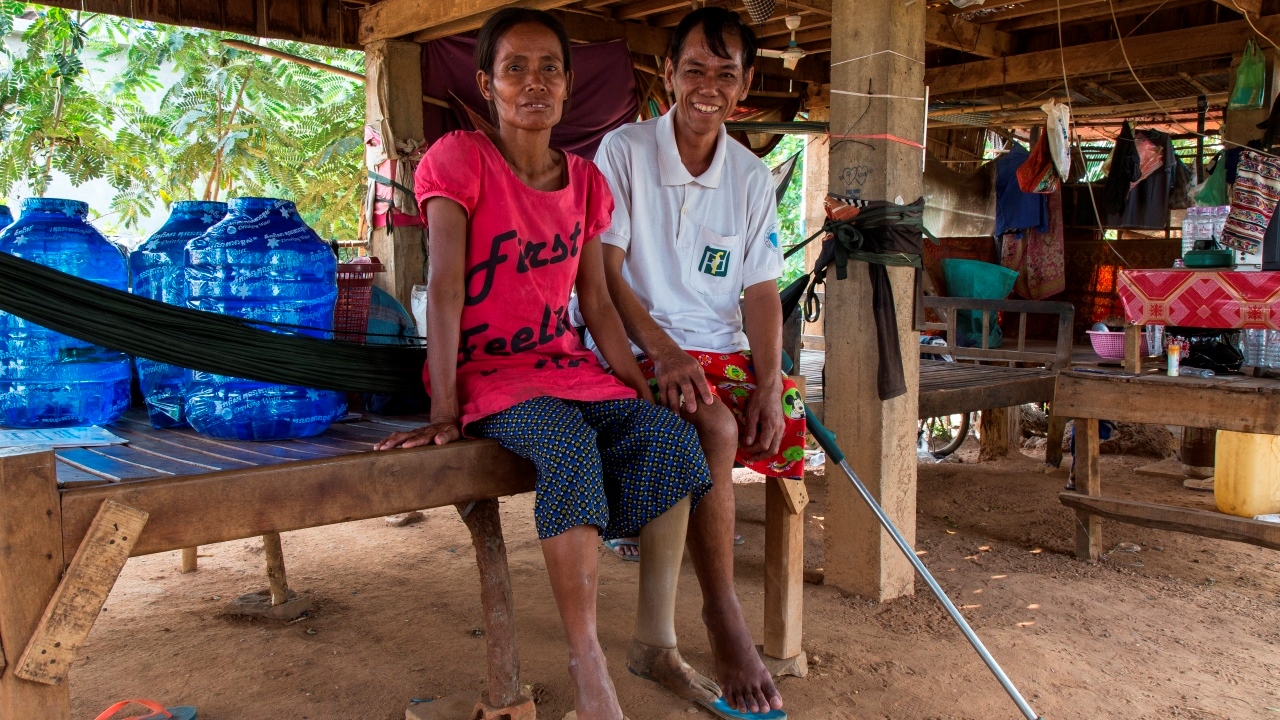 He was born in Kompong Cham province, while she was born in Takeo province, further south. Under normal circumstances, they would probably never have met.
One day in 1986, Tirean’s boss sent him and some friends to another town. At the time, Cambodia was still littered with antipersonnel mines. Tirean stepped on one of them. One of his friends died in the explosion, while his left leg had to be amputated.

That same year, around 200 km away, a young woman, 18 years old, set out with some neighbours to gather bamboo. The same thing happened to Navea. She also had to have her left leg amputated. ‘I was lucky,’ she adds. ‘Initially, I thought I would not be able to walk any more. But one of the doctors at the hospital in Phnom Penh, where I was being treated, took me under their wing. It was because of them that I could receive a prosthesis!’
‘It took me three months to learn how to use my prosthesis. My husband took less time, but now he prefers to use a crutch, while I still wear it and walk faster than someone with both their legs.’ Her husband laughs: ‘Yeah, you even sleep with your prosthesis on!’

They met in 1993 at a vocational training centre for people with disabilities in Phnom Penh. ‘We started talking... and then fell in love.’ And you can tell they still are just from looking at them! The husband and wife are always teasing each other and exchanging knowing looks.
‘We have three boys. They are currently 22, 18 and 9 years old. The youngest two are still studying, but the eldest is married and we will soon be grandparents,’ says Navea, clearly proud of her family.

The couple earn their living with one of them running a small shop and the other a laundry service.  ‘With what we earn, we have enough to live on, pay for schooling for the children and can even put some money aside.’
The couple are able to use the services of the Handicap International rehabilitation centre in the city of Kompong Cham. Navea will need to go there soon. ‘I wear out my prosthesis quickly. There are a lot of stairs here. I lose track of how many steps I go up and down to wash the laundry and hang it up to dry. They may need to change the foot.’
Tirean adds: ‘I use my prosthesis more when we go out, to go to the market for example. Years ago, people would look strangely at us. We really felt discriminated against. But now, we no longer feel this uneasiness. Yes, I can say that we are happy.’