Saiful is 7 years old. He lives in the Rohingya registered refugee camp in Kutupalong, southern Bangladesh. Due to a congenital malformation, he lost his right leg when he was two years old. With support from Handicap International, he has been fitted with an artificial limb and can now walk and attend school.  He loves playing with his friends and dreams of becoming a pilot one day. 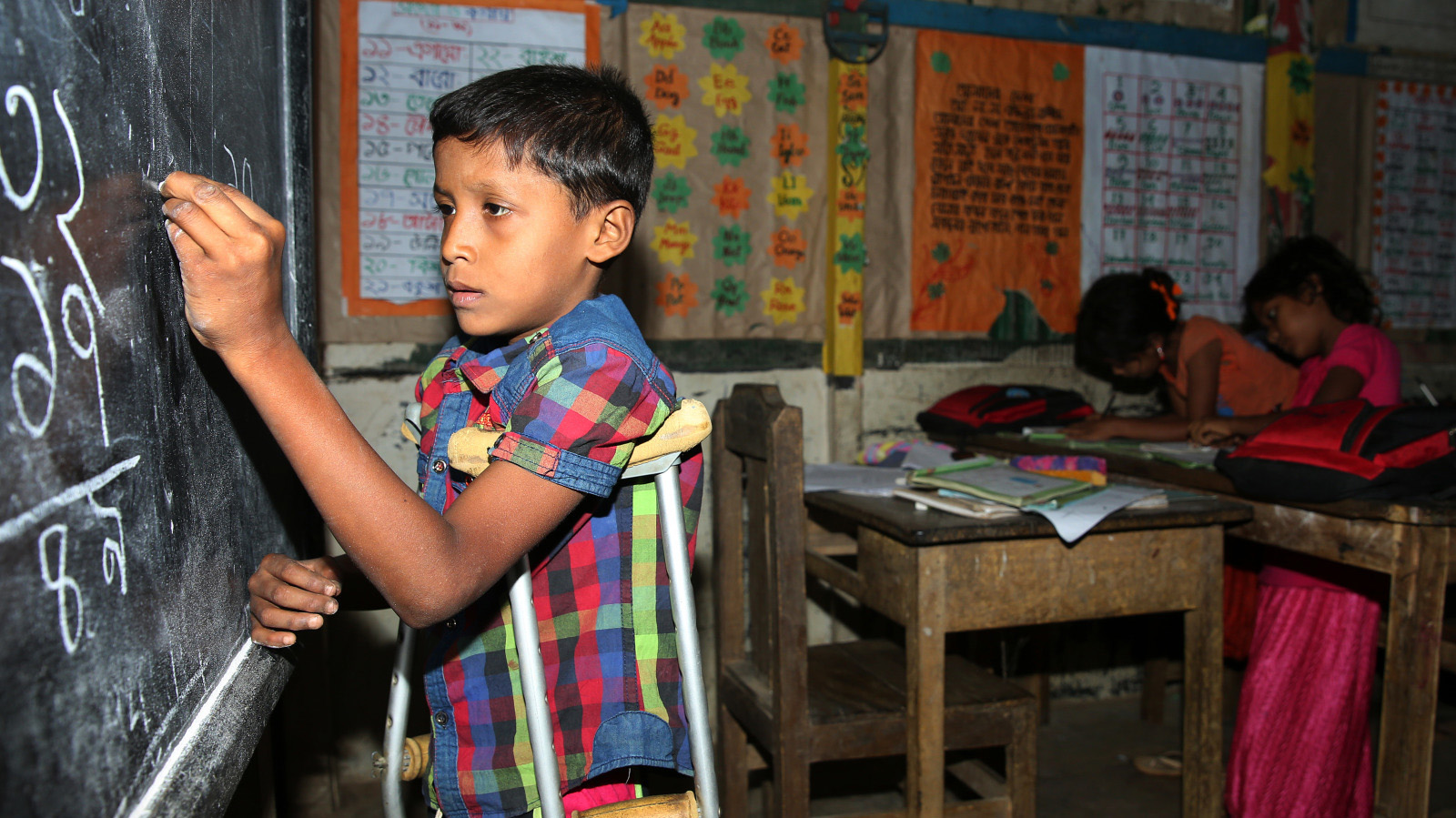 It’s the monsoon season in the Kutupalong refugee camp in southern Bangladesh. The ground is muddy and slippery. Seven-year-old Saiful steps cautiously along the path to school. “I’m afraid of falling with my artificial leg,” he says, surrounded by his school friends. Saiful and his family live in the Rohingya registered refugee camp in Kutupalong, Bangladesh. At age two, he lost his left leg due to a congenital malformation. With support from HI, he has been fitted with an artificial leg and can now walk and attend school.

After a long journey by boat and bus, Saiful’s parents arrived in Dhecua Palong camp, before moving to Kutupalong refugee camp in 1993. They settled down, and their family gradually grew until their sixth child, Saiful, was born in 2009.

Saiful was born with a congenital malformation of the foot. “His right foot was deformed and turned inwards. It got worse and became infected. They said it was osteomyelitis[1]. The doctors told us several times that it needed to be amputated. We couldn’t imagine doing that,” explains his mother.

Over the course of two years, Saiful visited hospitals in the region on more than ten occasions. Visit after visit, the advice was always the same: Saiful needed an amputation. His parents resisted and refused to authorise the operation. Saiful would keep his leg.

Saiful had to permanently take antibiotics. One morning he woke up and couldn’t move his legs or blink his eyes. He was rushed to Cox Bajar Hospital where he had his right leg amputated. “We were miserable and felt demoralised. Saiful did too. He became isolated, and didn’t want to go out in case he fell. And us, we were exhausted,” she admits.

Saiful, 6, walks for the first time

In 2013, HI’s physiotherapists met Saiful in the refugee camp: “He was shy and wasn’t moving around. We check the state of his leg and make sure he attends rehabilitation sessions and does exercises to restore his flexibility and to firm up his limbs. We’ve also set up parallel bars close to his home so he can get regular exercise, and we’re training his parents to conduct rehabilitation sessions. But most important of all, in 2015, Saiful, 6, got his first artificial leg and took his first steps,” explains Bayzed Hossain, Disability officer for Handicap International in Bangladesh.

“We’d given up hope. We thought Saiful would never walk again. His artificial leg changed everything. Our boy is now learning to walk and going to school. He made friends and he’s more confident now,” adds his father.

June 2016. Saiful, 7, is writing on the blackboard. “Saiful is cheerful and he fits in well,” says his teacher. “He’s helped by a group of children who go around with him. We’ve made a few changes to make him more comfortable. HI trained us to include children with disabilities in the classroom, as best as we can.”

Saiful also takes part in the sport and leisure activities organised by HI, which bring together more than 800 children with and without disabilities. “Khelain arto besi gom lage” - “I love to play,” says Saiful. “But not with the ones who make fun of my leg.”

Today, Saiful is getting to grips with his artificial leg. With support from HI, he is more autonomous, better integrated and can go to school. He has grown in confidence. But his situation is still complicated. “Saiful needs to improve his balance and learn to walk with his artificial leg.  He fell and burnt himself recently. He needs to firm up his limbs and become more flexible. And he’ll need a new artificial leg next year, as he keeps growing,” explains Bayzed Hossain.

“HI’s support is vital to us,” say his parents. “But life in the refugee camp is still tough. We have seven children, and we live in a single room. There’s no privacy. It’s hard to access water and sanitary facilities, and hygiene is very bad. There’s mud everywhere in the monsoon season, and the heat is unbearable in the dry season. No one works here and not all of the children go to school. It’s awful not knowing what the future holds. The only thing we want is to finally feel at home, somewhere,” explains Noor Nahar, Saiful’s mother.

Saiful comes home from school. He’s going to meet up with his friends to play marbles. Before he says goodbye, we ask him what he’d like to do when he’s older. His parents reply: “A pilot! It’s his dream”. Saiful adds, without missing a beat: “Ai dorwayrea asmane urium” - “When I grow up I’m going to fly”.

[1] Osteomyelitis is the inflammation of the bone marrow and bone.