Thirty-one-year-old Fatou Diaw has found and destroyed over 50 mines in her impressive seven-year career. Equally at ease with probes, metal detectors and slashers, she knows demining back to front. Below she describes how her work became her passion. 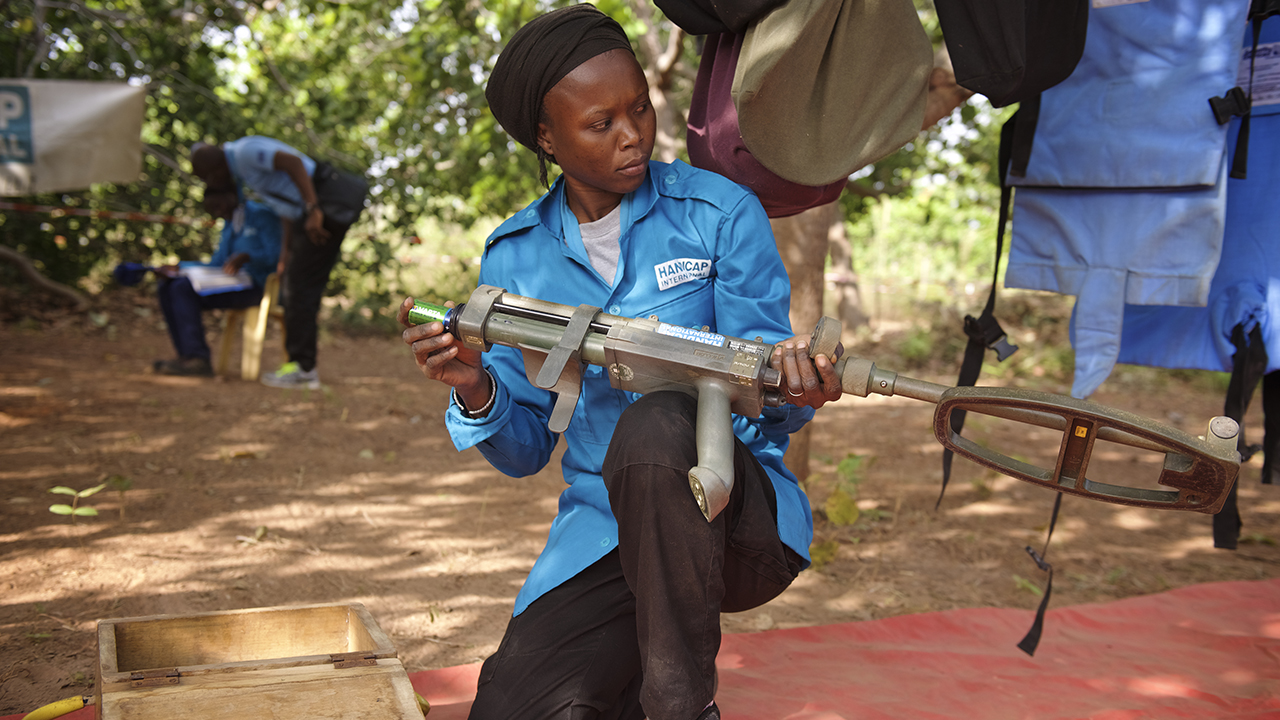 Fatou Diaw arrives home on the outskirts of Ziguinchor, the provincial capital of Casamance, at 4pm. After catching up with her two sons, 11-month-old Pabomar and 4-year-old Mamdulami, she makes the family meal and baths her boys before bedtime. Her husband, who works as a tailor in Dakar, only comes home once every four months. According to her niece, Fani (22), who lives in the family home: “A lot of my college friends are surprised when they learn what my aunt does for a living. It’s really physical!”

In a region where most women are expected to become full-time homemakers when they have children, a young mother who is also a deminer doesn’t go unnoticed. “I really enjoy demining,” explains Fatou. “Because when I’m working, I really feel I’m helping a lot of people: people who had to abandon their villages and fields, who were displaced by the fighting, return home to find themselves surrounded by mines. By doing this job, I know I’m saving lives.”

Demining is still a problem in this part of southern Senegal. Although the violence that rocked Casamance for 30 years is now a distant memory, the mines laid during the fighting, often on the edge of villages, continue to put people’s lives in danger.

For Fatou, everything started in 2008 when she happened to read an advertisement for deminers published by Handicap International in a local paper: “I was looking for work. I didn’t know exactly what the job entailed. I applied and when I went for my first interview, they explained what it involved. I liked the idea straightaway. One of my cousins died in a mine accident in 2001. He was only about 20 at the time. He stepped on a mine. Both of his feet were torn off in the explosion and he died a couple of hours later. It had a big impact on me.”

Out of 12 applicants, only two, including Fatou, were selected after a trial period. She took a six-week training course and then started her first mission.

“I was quite stressed the first week. And I was a bit disappointed because I didn’t find anything. My manager said: ‘Don’t be impatient. You’ll find one’. And I did! When I found my first mine, my blood froze and I shrank back. I called a colleague who took over for me... Then I started finding more and more of them, and I got used to it very quickly. Since I started working as a deminer, I have identified more than 50 mines.”

Watching Fatou at work is a sight not to be missed. Concentrated on the job in hand, oblivious to the world around her, and moving with extreme precision, whether she’s handling a metal detector or unearthing a mine, Fatou knows there is no margin for error.

“Deminers like finding mines - like fishermen reeling in a fish,” explains the head of Handicap International’s demining team, Charles Coly. “It’s sort of their reward for a job well done. A mine destroyed or deactivated is a life saved! Deminers know how important their work is, and they are proud of it.”

“I remember finding a mine once that was connected to a trip wire,” she says. “It looked very dangerous, but you just have to follow the rules: you take a stick and, without overdoing it, you lightly free it from the plants and follow it to the end, where you’ll find the device, which could be a grenade or an improvised explosive device. We destroyed it on-site.”

Most people think demining is a man’s job. And it’s important not to underestimate the physical effort involved: “That’s something you don’t realise, how hot it is when you’re wearing the safety equipment, how tiring it is to stay focused, and how uncomfortable you are, kneeling, crouching - it can be exhausting. But it’s the same for men and women,” she stresses. “We do the same work.” But despite the difficulties involved, more and more women are choosing to do this job.

What’s the most desirable quality in a deminer, according to Fatou? “You need to have a lot of patience because you sometimes work for a long time and you don’t find anything. You often feel tired, but you need to stay focused. If you let your guard down, you could make a wrong move and trigger an accident. That’s why you always need to have a clear head and not let your mind wander. It’s really important to be mentally prepared.”

Senegal launched its demining operations at the end of the 2000s, in partnership with humanitarian organisations, including Handicap International. The country has set itself the target of being mine-free by 2021. Handicap International plans to demine 55,000 square metres of land - the equivalent of eight football pitches - in 2016.