Ceasefire announced at Gaza, HI prepares to rehabilitate over 500 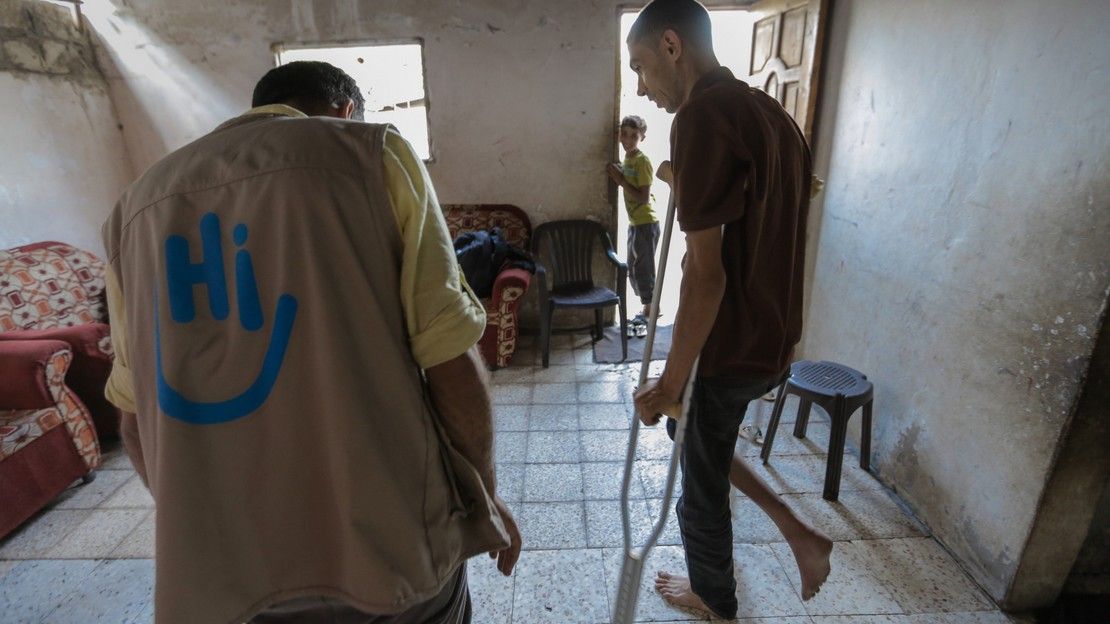 Twelve days after the most recent escalation of violence in the Gaza strip and Israel, the parties involved have announced a ceasefire.
This long awaited break comes after nearly 8 days of constant bombings resulted in 242 lives lost between Gaza and Israel, including 67 children and 43 women . Over 1700 have sustained injuries. [1]

“We’ve been waiting for a ceasefire as soon as possible. We can now start responding to humanitarian needs with more ease and be able to intensify the distribution of a lot more aid than what we’ve done so far.”

According to a recent report by the UNWRA, around 91,000 people have been internally displaced, over 66,000 of which have sought shelter in the 58 UNWRA schools opened for their benefit. Amongst these, HI teams have been able to conduct needs assessments to determine next steps.

“We’re starting to get clearer data thanks to these evaluations. We have identified over 500 people in these shelters that are disabled and in need.”

HI’s Rehabilitation Task Force Coordinator in Gaza, Reham Shaheen, explained the needs of the vulnerable populations HI serves in areas of conflict. Reham says, “Psychosocial support is one of the greatest needs. Many will lose a limb or an organ and will have psychological needs afterwards. People really need mental health and counselling to cope with the current situation. Then there is great need for multidisciplinary rehabilitation services, like physiotherapy and wound dressing sessions to prevent disabilities after injury.”

“Usually the needs of injured people change after a few weeks. There is either deterioration or improvement in their condition, so there is dire need for assistive devices and rehabilitation support as well.”

At this time, HI is prepared to distribute mobility aids such as crutches, walkers and wheelchairs, along with Infection Prevention and Control kits to keep wounds clean and prevent infection that could lead to long-term ailments.

The region is also still in the midst of the COVID-19 global pandemic. “This escalation occurred while we’re being hit with a second wave of COVID19”, says Reham. “We have two emergencies, so there is a need for hygiene kits. People need to have clean environments to be able to avoid illness, and in terms of injuries, to keep their wounds clean to avoid any infections.”

While the civilians of Gaza and Israel finally can breathe easier for now, the greatest hope is that the ceasefire remains in place.

[1] Escalation in the Gaza Strip, the West Bank and Israel | Flash Update. (2021, May 20). United Nations Office for the Coordination of Humanitarian Affairs - Occupied Palestinian Territory. https://www.ochaopt.org/content/escalation-gaza-strip-west-bank-and-israel-flash-update-10-covering-1200-19-may-1200-20-may