Cluster bomb victims works to save others from his fate

Two years ago, we met Nouay Phonesomxay, a Lao cluster bomb victim and Handicap International deminer. In May 2016, we caught up with Nouay as he and his team cleared land around Ponntong village, which was located near the former Ho Chi Minh Trail. During the Vietnam War, the North Vietnamese used the Ho Chi Minh Trail to bring supplies through Laos to support troops in Southern Vietnam. This route was heavily bombed by the U.S., and a high level of UXO pollution remains in the area today.
Under the blazing sun and 102F (39C) heat, Nouay Phonesomxay and his fellow Handicap International deminers slowly move through the dense vegetation inside a 2,500 square meter plot, looking for bombs. Once primary jungle, the foliage was decimated by U.S. bombing during the Vietnam War and now only weeds and bramble grown here. 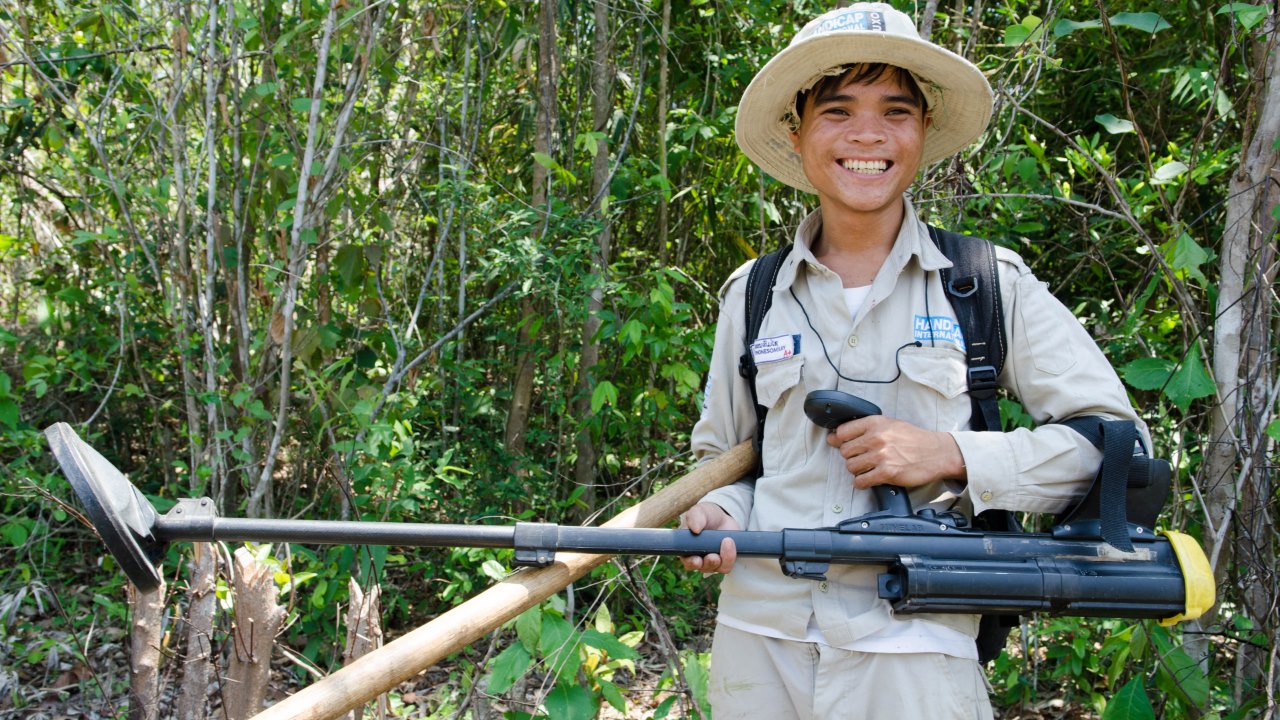 Despite the difficult terrain, the deminers have already found 19 bombs around this site. Nouay moves in a snaking pattern across his section of the plot with a metal detector in one hand and a shovel in the other. Suddenly his metal detector begins beeping loudly, and he kneels down investigate with his shovel. Unlike landmines, which can be triggered by the slightest touch, the cluster bombs and other explosives commonly found in Laos are less sensitive, so a deminer can carefully dig around UXO without the detonating it.

Never-the-less, we step back a safe distance while Nouay digs. This time, he finds a harmless piece of metal.
It’s only when we get closer that Nouay’s disability becomes visible—he’s missing the tips of four fingers on his right hand and has scars on his hands and face. When he was nine years old, he found what he thought was a stone while playing outside. When he threw it on the ground it exploded and shrapnel hit his hands, face, and left eye. He had found one of the more than 270 million cluster munitions, or “bombies,” that rained down on Laos between 1964 and 1973.

Even with his disability, Nouay does his part just like the other deminers. “I am very proud to work for Handicap International,” says Nouay. “Sometimes my hands hurt when the weather changes, but I keep going, because my work protects other people from having accidents like mine.”

In 2014, Handicap International came to Nouay’s village to teach people about the risks posed by UXO and how to spot, avoid, and report suspected bombs they might find. “After the safety briefing, I went to the team leader him and asked him if Handicap International needed any staff,” says Nouay. “When said ‘yes,’ I asked if they would give a person with disabilities like me a chance. He told me to apply and eventually Handicap International accepted me as part of the team.”

Nouay and his team live together and work every day from 7:30am to 4:30pm for 21 days straight before being able to go home and rest at the end of month. It’s hard work for Nouay, who is only 20 years old, but he knows there is still so much more clearance work to be done. The Laos National Regulatory Authority for UXO estimates that at the cenurrent pace, it will take 100 more years to fully clear the country of bombs.
“There is still so much contamination in Laos,” says Nouay. “We need Handicap International. We need more clearance work, more risk education, and more people who support peace in the world. I hope in the future I can share my story with people in villages around Laos so I help them stay safe and show them that a person with disabilities can do something important with his life.”