HI has completed its demining operations in the Tshopo, Ituri, Bas-Uele and Haut-Uele provinces of the Democratic Republic of Congo (DRC), launched in January 2016. Over a two-year period, HI and its local partner, AFRILAM (Africa for Anti-Mine Action) cleared 34,520 m2 of land of mines, the equivalent of 5 football pitches, benefiting the 5,600 inhabitants in the region. 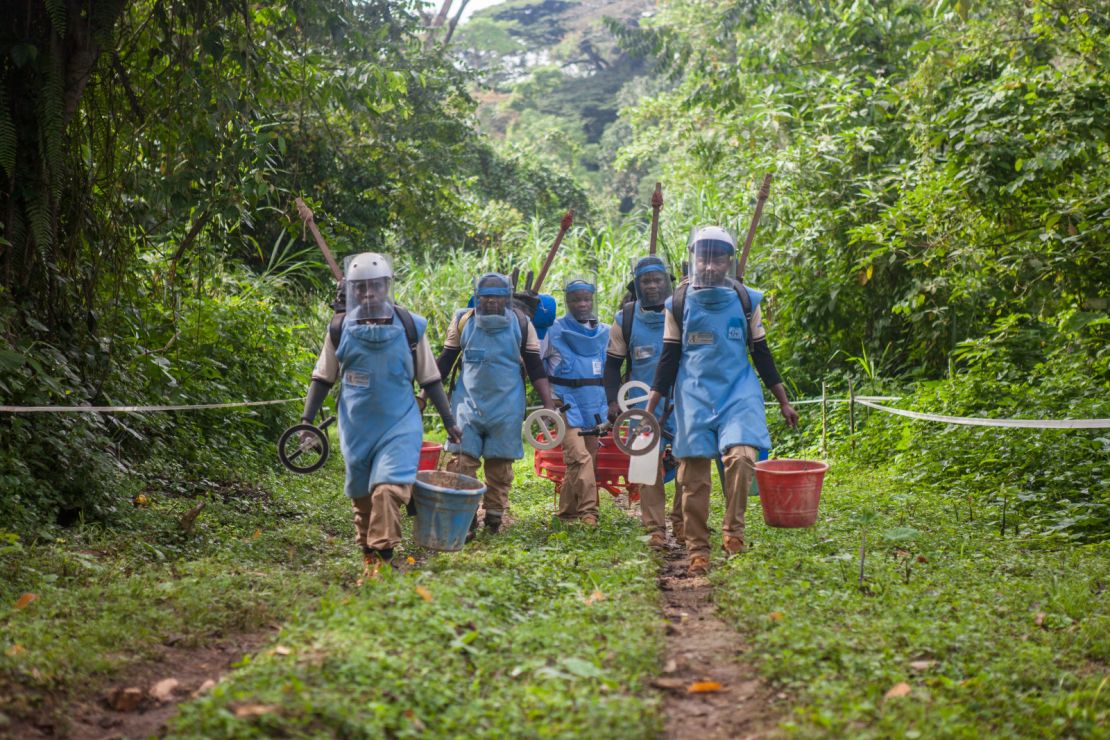 The AFRILAM demining team on its way to a clearance zone on the Itendey site | ©B.Blondel/HI

From January 2016 to December 2017, the AFRILAM demining team cleared close to 34,520 m² of land, mostly fields, roads and pathways used by three villages. Around 5,600 people have been freed from the threat of mines and explosive remnants of war, the legacy of conflicts between armed groups in the region which started in the 1990s.

The mines have been cleared manually by a team of 19 deminers trained by HI. On average, one deminer can manually clear 13 m² a day. Since operations began in 2016, 21 mines have been made safe and destroyed, along with 25 Explosive Remnants of War (ERW) including F1 grenades, PG7 rockets and 120 mm mortar shells.

"Despite the very difficult conditions in the zones concerned, due to the rainy season from October to May and the very dense vegetation, the demining operations went very well. These operations also provided an opportunity to train and upskill the deminers involved. HI also put into place 85 sessions to raise awareness of mine and ERW risks, which were attended by 6,000 people. This will help the local populations to feel safer and to go about their day-to-day activities serenely," explains Jadot Bamungu, responsible for controlling HI's demining operations.

Antipersonnel landmines were first used in 1960 in the Democratic Republic of Congo when it achieved its independence. Since 1996, there has been widespread use of mines by the various armed groups fighting in the north and east of the country in a succession of conflicts. They still today pose a constant threat to the local population.

Handicap International has been  working in DRC for 20 years. Having been heavily involved in demining operations, its previous projects in this area date back to 2014. Alongside AFRILAM, its partner since 2008, it has been deploying new operations in this area over the last three years.

A State Party to the Ottawa Mine Ban Treaty, the Democratic Republic of Congo has set itself the goal of becoming mine free by 2021.