The benefits of rehabilitation

Maud Bellon, director of HI in Yemen, describes the situation in Sana'a, where the organisation is based and provides humanitarian response. 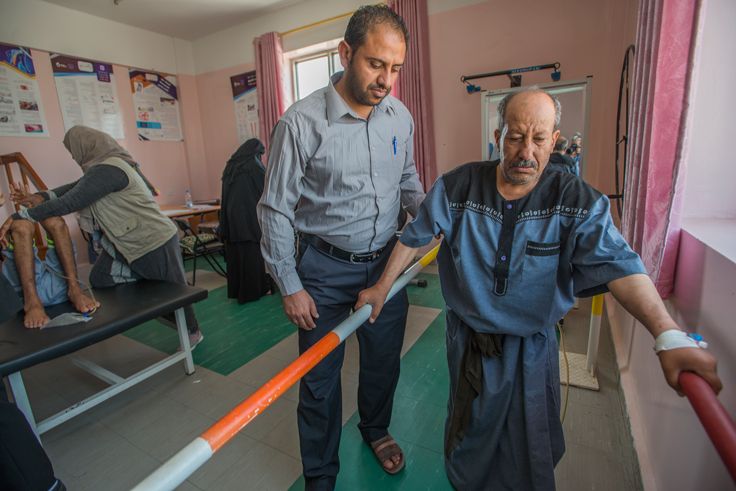 Physiotherapist Feida and psychologist Athen visited Al-Thawra Hospital in Sana’a, as they do every day. With more than 500 beds, it is the largest hospital in Yemen. People sometimes travel hundreds of kilometres to be treated here. Feida and Athen see an average of four to five patients a day, in addition to the support and advice they provide to the hospital's medical staff.

Today, they met a new patient, Shuruq, 15, who suffered multiple leg fractures when her husband's gun fell to the floor. The surgeon fitted her with pins yesterday and her rehabilitation care is gradually getting underway. Psychologist Athen spent time with her this morning. Shuruq had just arrived at the hospital and was completely panicked. She didn't want the medical staff to touch her. She comes from a small remote village, was married at the age of 13, and had suddenly found herself in a large hospital in a big city. She was totally overwhelmed by everything that had happened to her.

Athen reassured her, spent time listening to her story and explained how her treatment would work and, above all, helped her to understand the risk of disability if she does not complete her rehabilitation care.Then, physiotherapist Feida began the first rehabilitation exercises with her, which included knee mobility movements and ankle exercises to prevent deformity. She also taught her the right moves to get out of bed. We got her to walk with a walking frame without putting her body weight on her injured leg.

We then met her husband to teach him to change her bandage, and to help Shuruq as best he can during her recovery. He now needs to fulfil his role as a caregiver.

Today we returned to the Sana'a rehabilitation centre to complete the rehabilitation of two people with orthoses: a young woman injured in a car accident who has an orthosis to strengthen her right leg, and a young man who was given an orthosis to support his ankle after his foot was injured by a mine. This was their last session. They now find it easier to move around.

Many of the patients we see are mine casualties – in the centre alone, I’d say about 20% of the 30 patients followed up each week fall into this category. We also work in seven hospitals.

We saw two new patients today, both young men injured in bombing raids: one below-the-knee amputee and one foot amputee. Patients injured in this type of incident all suffer shock. They are almost always the only income-earner in their often-impoverished families, which is a very stressful situation to be in. They’re usually farmers and worry about how they’re going to carry on working. It’s a harrowing experience and they need psychological support.

Yesterday we helped a couple who needed practical advice and reassurance. Their restaurant and home were destroyed in a bombing raid several months ago, in which their two-year-old daughter also lost her lower leg. They didn’t know where to turn. We taught them how to bandage and clean the wound, and to put the stump in the right position. We reassured them by providing them with information about the next steps in their daughter’s recovery. They have lost everything and need support.

The situation in Sanaa has been very calm in recent days. Two weeks ago a military base was bombed at night. It was relatively far away. It shook the house, but since then... nothing. But the conflict in the country remains particularly violent.

Our team of physiotherapists and psychologists continues to visit the city's hospitals and rehabilitation centres. The needs are still huge. Today, we finished the rehabilitation work with two patients, after three weeks of daily exercises. Both were young men who had undergone below-the-knee amputations. At the end of the rehabilitation sessions, patients often ask the same questions: Can I wash with my prosthesis on? Do I have to take it off to sleep? How should I clean the stump? Can I go out in the rain with it on? Is it normal that it smells bad? In answer to the last question, as the stump is enclosed all day in the prosthesis, it can get a bit smelly like feet in closed shoes all day.

At the end of the rehabilitation sessions, we provide them with all the practical advice they need, and the patients know they can contact us whenever they want. Many patients come back a few months later for adjustments to be made to their prosthesis. Often, the person amputated has lost weight and the socket (the part of the prosthesis which fits onto the stump) has to be adjusted.

Most of our patients are extremely poor and have to travel up to 200 km to receive care from HI. Awareness of our activities is growing in the region. A prosthesis is very expensive for people in Yemen, nobody can afford one.

We welcomed a new patient to the rehabilitation centre today: Ferial, 25, whose right leg was riddled with bomb shrapnel in an attack three years ago. They hit a nerve, causing paralysis, and she needs an orthosis to walk.

As her marriage was annulled following her accident, she also needs psychological support. She is out of work and people around her regularly make remarks about her limp. HI's psychologist, Hilam, decided to arrange regular sessions for her to restore her self-confidence.

Physiotherapist Ayman and psychologist Hilam returned to the Sana'a rehabilitation centre this morning. They examined three patients and saw Hussein for the second time. Hussein is 23. He was amputated below the knee after walking on a mine. He came to the centre three weeks ago but since his stump had not healed it was too early to fit him with a prosthesis. Our team taught him how to release the pus and clean his wound. During his first session, we noted down his name, age, address, and other practical information. We also wanted to understand what sort of injury he had and what his psychological state was like. Does he sleep okay? Does he have an appetite? Is he anxious? Does he feel aggressive? Once we know these things, it will help us work out if the patient is going to respond to care or not.

Today, Ayman examined him and decided that Hussein could be fitted with a prosthesis. His stump is healthy. It does not ooze anymore and he can stand on one leg. These are the sorts of things that tell us if a patient can be fitted with a prosthesis or if he or she needs to wait a little longer. We took his measurements, made a cast and in five days he will have a prosthesis to fit him. Then we can start the exercises to teach him how to use it.

Today, our physiotherapist Aiman and psychosocial worker Sana spent time in the city's rehabilitation centre. They saw about fifteen patients fitted – or soon to be fitted - by the centre. They gave them a check-up and did exercises with them.

They spent most of their time with a new patient, Afraq. Afraq is 12 years old. She lives in the countryside. Three months ago, she stepped on a mine as she gathered wood to cook dinner. Doctors had to immediately amputate her left leg.

She’s now ready to be fitted with her prosthesis. Her stump is healthy and has the right muscle tone. It has healed well and doesn’t weep. We took her measurements and made a cast for the centre, which is going to make her first prosthesis. We covered the costs. I say "first" because as she grows, she’ll have to change her prosthesis regularly.

Last week, we replaced her underarm hospital crutches with elbow crutches. The elbow cuffs and handgrips will help her posture – she’s less stiff already - and make the crutches easier to handle. She has fewer problems now, and it takes her less time to move from around.

Sana’s psychological support is vital. People are often left in a state of shock after an amputation. Afraq has lost confidence in herself. She needs to be reassured that she can still live a normal life and play with her friends like any other girl, even though she wears a prosthesis. She shouldn't be scared to run around, for example.

Once her prosthesis has been made, we’ll begin doing exercises with her and teach her how to use it, put it on and walk with it. She’ll need about ten half-hour sessions over several days.

The security situation in Sana'a is quite calm at the moment. There have been almost no bomb attacks for a few weeks now. We meet in the office at 8am.

The teams then travels to the eight hospitals and rehabilitation centres where we work. It takes 20 minutes to an hour to drive there from the office, depending on where it is. Needs vary, so they work in teams of two to eight people, including physiotherapists and psychosocial workers. They spend the day there and come back at 3pm.

They provide casualties with rehabilitation care and psychological support. They also provide support to physiotherapists in health facilities and train nurses and doctors in rehabilitation, demonstrate correct medical procedures, how to use equipment, etc.

There are peaks and troughs because the casualties arrive in waves, after bouts of fighting and violence. We have to deal with the sudden arrival of large numbers of patients. In Sana’a, we work in a mountainous area, so there are medical deserts. People come from very far to be treated. Many areas of Yemen are affected by service shortages (medical, social, etc.).