Last year, Em Mohamad, 40, was injured in an airstrike along with her family. For the last few months, she has been attending physiotherapy sessions to help her recover from a broken left arm. Handicap International’s assistance is made possible with support from the EU’s Humanitarian Aid and Civil Protection Service (ECHO) and its local partner in Syria. 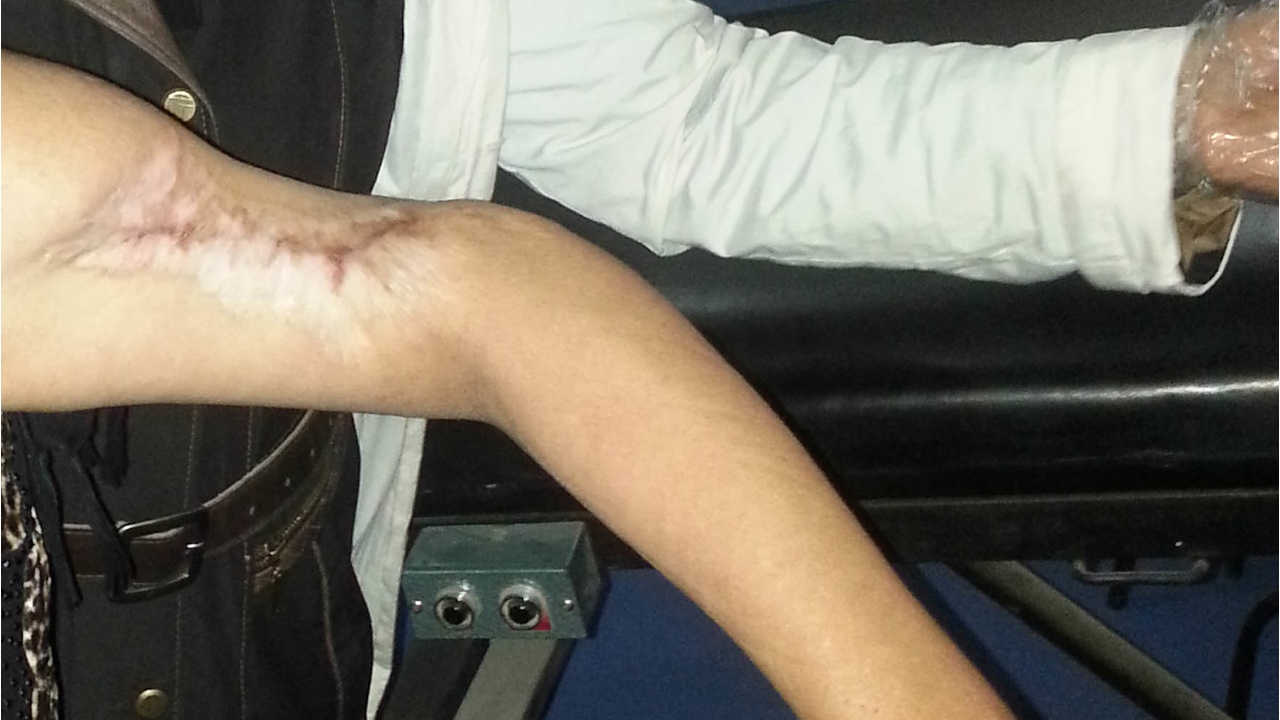 “It was in July 2015”, recalls Em Mohamad, glancing at the scar running along her upper arm. “We had a little grocery store where I worked with my son. My granddaughter, Asil, came to visit us in the shop. Two other members of our family also came to chat. Around mid-morning I heard a plane approaching.”

Abou Mohamad, her husband, tells us what happened next:

“I was at home, not far from the grocery store, and I heard the same sound. The bombs began to explode so I ran straight to the store. When I arrived, they were all lying unconscious in a blood bath. I started shouting for help but everyone still alive had fled. The first air attack is usually followed by a second one, to hit the civilians who come to assist the injured, and the ambulances.”

When he arrived, Abou Mohamad’s first thought was for his granddaughter. But she was already dead, hit in the brain by shrapnel.

“Then I ran to my son, Ahmad, but he had suffered from the same injuries as Asil. Then I helped my wife and two relatives, who appeared to be alive. I dragged them one by one to a neighbour’s car and drove to the nearest health centre. My wife was transferred to another hospital because she had a complex fracture of the arm. Three days later, she hadn’t recovered from her injury but she had to come home because the hospital couldn’t cope with all the casualties arriving every day.”

The hardest thing for Abou Mohamad, however, was to tell his wife about their son and granddaughter: “I couldn’t bring myself to tell her the truth, but eventually I couldn’t hide it any longer,” he admits. Since the attack, Em Mohamad and her husband try to survive as well as they can. Their grocery store was destroyed in the attack, and they haven’t had a secure income in over a year. The electricity in their area was cut months ago, which makes life even harder. “We have to wash our clothes by hand, for example. And because of my injury I still can’t do that sort of task. It sounds like nothing but to me it’s really important,” she explains.

But despite her problems, Em Mohamad hasn’t given up hope, and taking part in her eighteenth rehabilitation session today. Basma, the physiotherapist, keeps her spirits up: “She still hasn’t fully recovered, but Em Mohamad has come a long way. She can prepare meals now and wash dishes. We’re still strengthening her muscles but she’s going to be completely mobile again soon.” Em Mohamad smiles and shares her plans with Basma: once she has fully recovered from her injury, she says, she would like to open a clothes store, so she can help her family again.