“I’ve found people I can finally talk to…”

Hussein, 25, was injured in an air strike in Syria, in 2013. Left paraplegic by a shrapnel that remains lodged in his back, he fled to Lebanon to seek treatment, leaving his family behind. Handicap International, with support from LIGHT FOR THE WORLD, is helping him recover physically and to fight his depression. 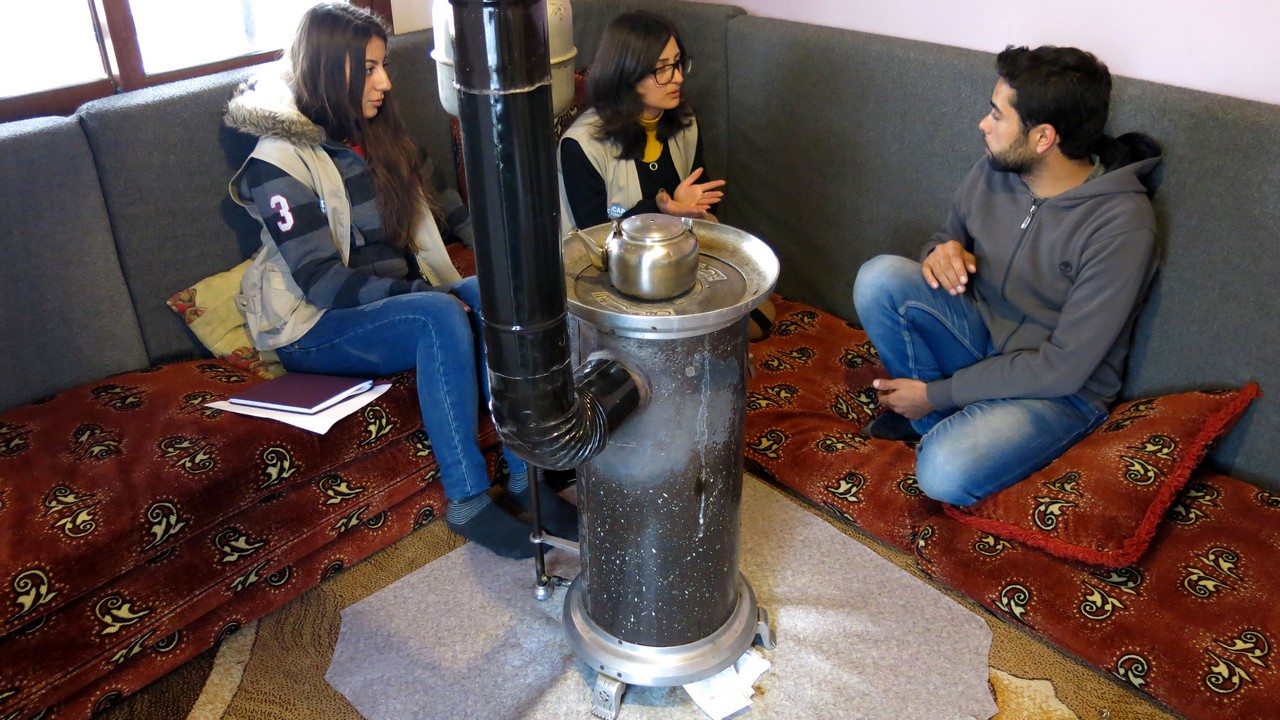 Huddled against the stove in his modest room, Hussein looks forward to his visits from Maram and Abeer, Handicap International’s psychosocial support specialists. "Today, it’s our fifth session,” explains Maram. “And I’ve already seen Hussein change house three times since we first met.” After arriving alone in Lebanon a few years ago, Hussein has survived thanks to the generosity of others. For the last few weeks, he has been living with a couple from his village, back in Syria. They also fled to Lebanon when they learned that they were going to have a child. Samar and Imad, now young parents, say : “When he came to live with us, Hussein seemed to be exhausted, physically and psychologically. He is starting to get better, but the fact that he has to change locations so often still troubles him a lot.”

It was Samar and Imad who told Handicap International about Hussein. The organization’s professionals rapidly recommended physiotherapy sessions for the young man. They also suspected that he was suffering from depression and referred him to colleagues, specialized in psychosocial support. Abeer and Maram then met with Hussein and organized a series of sessions to help him manage his anxiety.

“When we first met Hussein, his living conditions were awful and he didn’t want to talk to us at all. He was sharing an apartment with a dozen other Syrians and had no privacy. It took several sessions and a lot of patience to build up the relationship of trust we have with him now,” says Maram.

The aim of today’s session is to encourage him to work on his shyness. In fact, it was Hussein who came up with the idea.

“These sessions help me a lot. I’ve found people I can finally talk to and I’m learning little by little to get rid of my negative thoughts. Maram and Abeer are great people, it’s as if my mind had started functioning again since I met them,” he explains. The two women smile and invite him to tell them more about his life since he arrived in Lebanon. “When I left Syria to come here, I couldn’t even walk,” says Hussein. “Thanks to Handicap International’s physiotherapy sessions, I have gradually recovered. I can feel my legs again. Now I can take a few steps over short distances. I’m gradually getting back to normal, physically and mentally. My biggest dream is to return to how I was, before the accident.”

The discussion continues between Hussein and Handicap International’s professionals. Although he is still quite withdrawn, Hussein starts to open up more. “I want to worry less and leave my anxiety behind me, not to be so stressed about the future,” he says. Maram listens to him carefully, and tries to reassure him. Hussein is in a difficult situation. Unable to work, he has no way of meeting his own needs. His road to independence will be long. But Maram stays positive and underlines the progress he has already made. By keeping that in mind, he’ll be able to continue moving forward.

The session comes to an end and Hussein thanks Maram and Abeer for their help. He tells them that he doesn’t know where he’ll be living when they see him again, but that he’s looking forward to his next session.

Talking with the two young women helps him to feel better and to move forward.

“When the war is over, I would like to help rebuild my country and to find my family again,” 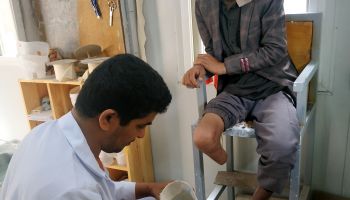