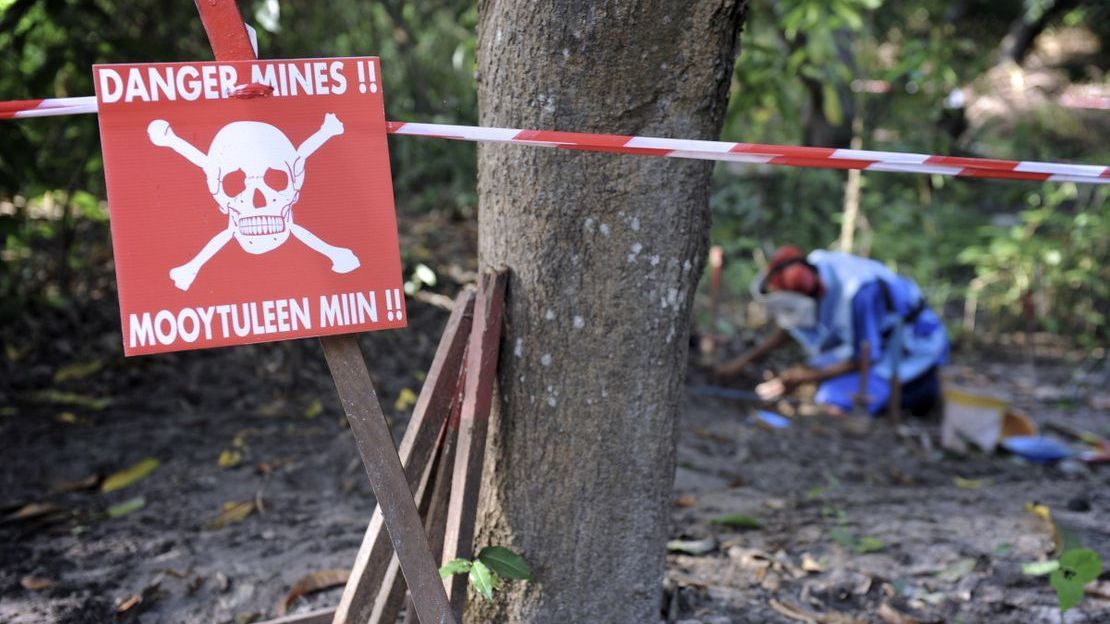 In May 2022, HI began mine clearance activities in Casamance, in the south of Senegal, where the organisation has already cleared almost 470,000 m² of land since 2008. The operations, which will last until March 2023, concern the communes of Kaour and Adéane, in the regions of Ziguinchor and Sédhiou.

"In these regions, the areas surrounding some schools, medical centres, roads, villages and fields are still polluted, or are suspected of being polluted by explosive devices," explains Abdourahmane Ba, head of mine clearance operations in Senegal. "But as the number of vital infrastructures, such as health centres, is limited, it is essential that people have safe access to them."

A total of 100,000 m² of land need to be released back to the communities. The aim is to clear areas contaminated by mines and other explosive devices and investigate suspected hazardous areas. It is estimated that these latest operations will clear 30,000 m².

Manual and mechanical mine clearance

HI has set up its operational base about 50 km from Ziguinchor. The teams stay there for 10 days while they carry out operations, then have a 3-day rest in town. The demining staff recruited for the project have more than ten years' field experience. The teams are made up of a project manager, an operations manager, two team leaders, six deminers, two nurses, two community liaison officers, a mechanic, two development officers and three drivers. In total, 10 deminers work for HI in Casamance, including two women.

"We do manual demining. Deminers inspect the land with metal detectors, centimetre by centimetre, along a marked corridor. HI also does mechanical demining, using the Digger. This is a demining machine that extracts mines and explosive remnants from the ground. It is mainly used in areas where there is a suspicion of undetectable mines such as the PRBM35 (Belgian-made) and the C3A/B (Spanish-made), frequently found in Casamance," explains Abdourahmane.

Adapting operations to the realities of the field

"We are also planning to use drones to support our demining activities," says Abdourahmane. "Among other things, they will improve our mapping of suspected hazardous areas. They’ve been used successfully in the Chadian desert, but now we need to test them in a different environment. In Casamance, we are demining in an environment mainly composed of forests and dense vegetation. A mission is underway to evaluate the feasibility of using of drones."

The scheduling of operations will have to be adjusted to the rainy season, which runs from July to October. Casamance is the rainiest region in Senegal. Torrential rains would slow down demining activities and for safety reasons neither deminers nor the Digger can work on flooded ground.

"Alongside the demining activities, HI conducts awareness and risk education sessions in the region, in partnership with the Senegalese association of mine victims," continues Abdourahmane. "The aim is to understand the habits of the population and to suggest safe behaviours that are adapted to their daily lives. Thanks to the work done by our liaison officers, all the members of the communities - including those who are often overlooked, such as people with disabilities, women or the elderly - are involved in deciding which areas should be cleared as a priority.”

HI will also accompany communities once they start returning to the cleared areas and contribute to economic recovery. In particular, the organisation will provide the people returning to live on the newly released land with construction materials. HI will also support the development of income-generating activities by offering training, for example.

Senegal has until 2025 to achieve its goal of becoming "mine-free". In Casamance, nearly 1.2 million square metres of land are still suspected of being contaminated and need to be made safe. Armed independence groups and government forces have been in conflict for almost 40 years. Anti-personnel mines and anti-tank mines, which were used on a massive scale in the region between 1990 and 2000, still threaten civilians today. Between 1988 and 2017, almost 850 people fell victim to mines or explosive remnants of war.

This threat prevents populations from returning to the region. But Casamance has substantial natural resources and strong agricultural, mining and fishing potential, so clearing this land is a humanitarian and development priority.