The Brazilian football player Neymar Jr. became the new ambassador of the charity Handicap International today. An event was organised in Place des Nations in Geneva on this occasion. Through this partnership, Neymar is using his huge fame for a good cause: to support the most vulnerable people in the world, people with disabilities in poor countries, victims of conflicts and natural disasters. 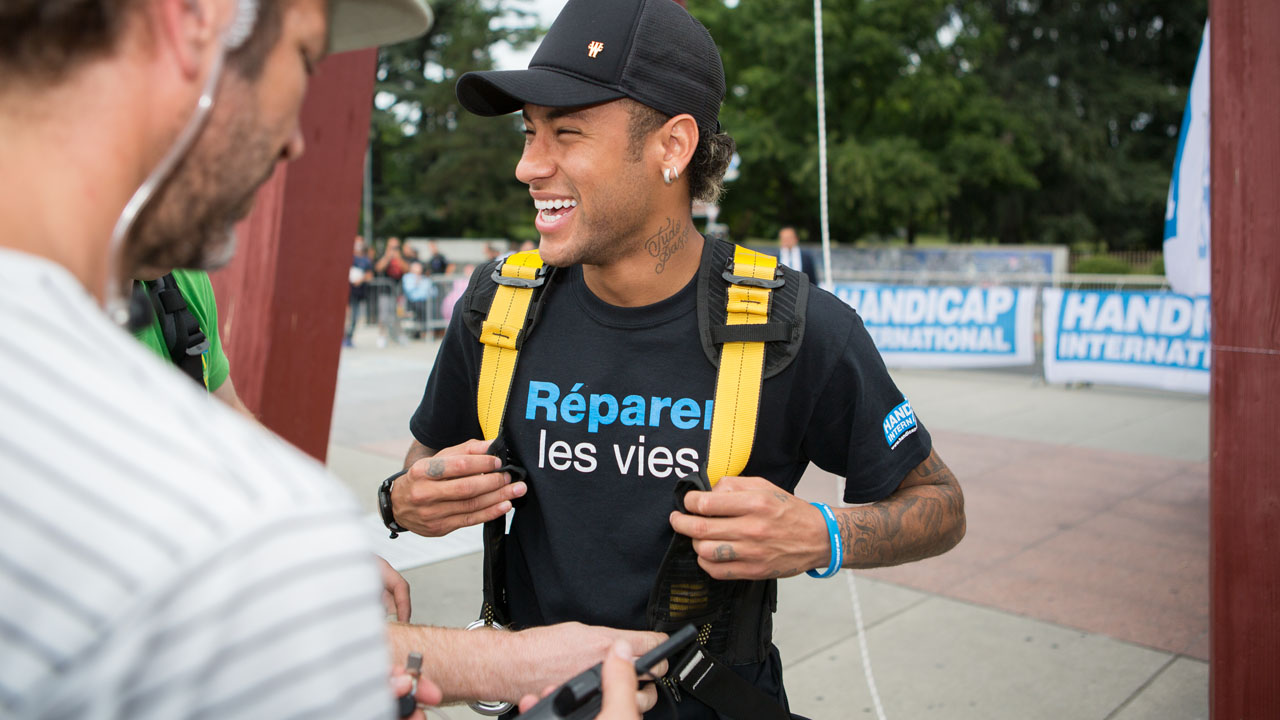 The first action of Neymar Jr. as an ambassador of Handicap International was to send a message of support to people with disabilities across the world.

Tuesday 15th August at 3pm, place des Nations in Geneva, the football player went on the top of the Broken Chair monument.

Broken chair is the work of the Swiss artist Daniel Berset, erected twenty years ago by Handicap International in front of the United Nations headquarters in Geneva to call for a ban on antipersonnel landmines.

While at the top of the iconic sculpture in Geneva, Neymar Jr sent a message to all the nations in the world, to call for more inclusion of people with disabilities in society. Symbolically, this message took the shape of a football with the logo of Handicap International on it. The ball was kicked in the flags alley situated in front of the Palace of Nations. The event was followed by a press conference hosted by the United Nations Office at Geneva.

More broadly speaking, Neymar Jr. chose to engage with Handicap International and to promote all of the charity’s work toward people with disabilities in poor countries and victims of natural disasters and conflicts.

The star and Handicap International met on the topic of access to prosthesis for amputee children, which is a topic particularly close to Neymar Jr.’s heart and with which he has already supported. He wanted to support actions on this topic on a global scale and got to know Handicap International’s work at the beginning of 2016. He expressed the wish to go on the field to see the charity’s projects. This has not been possible yet because of his busy schedule.

In October 2016, Neymar Jr. showed his support to the organisation’s actions in Haiti on social media, following Hurricane Matthew.

He answered positively to handicap International’s invitation to come to Geneva for the “Broken Chair” event.

On this occasion, he becomes the first international ambassador of Handicap International.