Like millions of Syrian civilians, Mahmoud had no other choice but to flee his country. After suffering severe shrapnel wounds in the leg, he now lives with his family in Azraq camp (Jordan) and receives regular visits from Handicap International’s team. The organization is able to provide assistance to people like Mahmoud, in Jordan, thanks to the support of the European Commission Humanitarian Aid and Civil Protection service (ECHO). 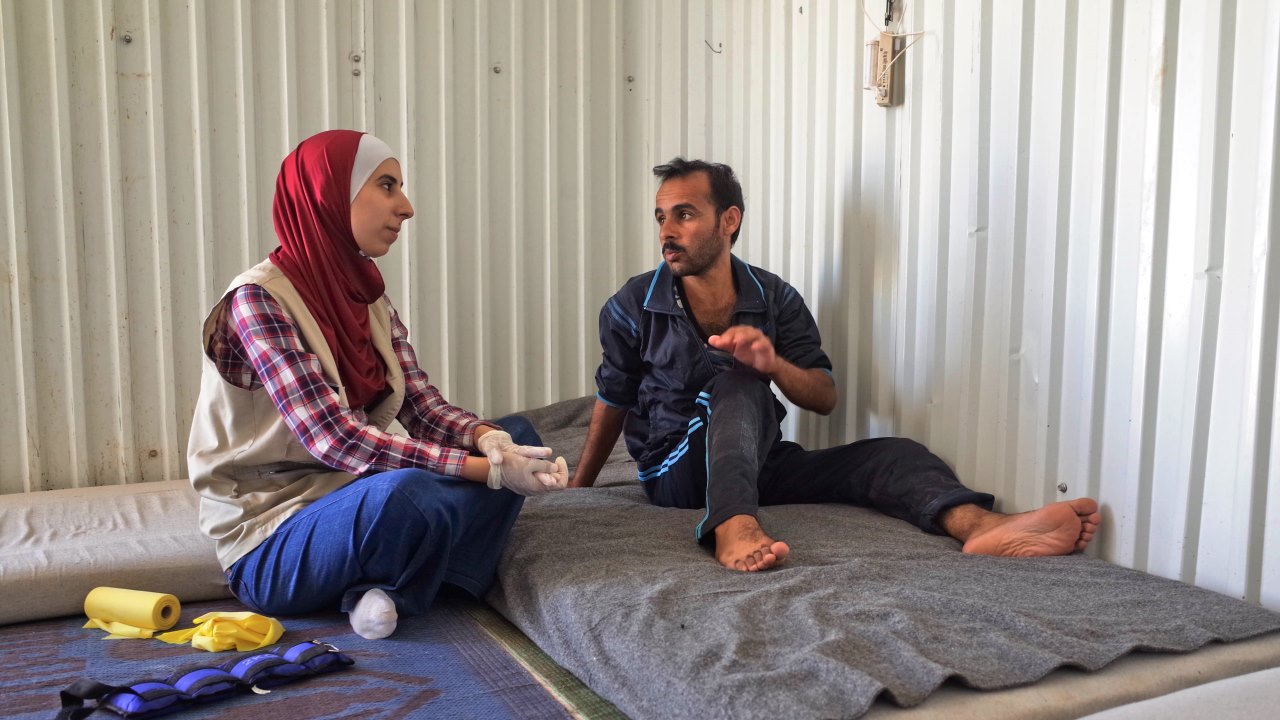 Mahmoud arrived from Syria with his wife and their three children on May 24th. He finally feels safe in the vast Azraq camp. Severely injured three years ago, Mahmoud initially sought refuge in Syria, before recently deciding to flee to Jordan. “Leaving our country wasn’t an easy decision for us, but we couldn’t carry on living under the constant threat of air strikes,” says Mahmoud.

Mahmoud clearly remembers the day his family’s life was turned upside down: “I was going to work as usual when I heard this terrifying sound. I woke up in hospital, and I was surprised I was still alive.

Like too many civilians who are hit by shrapnel from bombs or improvised explosive devices, Mahmoud suffered a serious wound in his leg: in his case, a compound fracture of the femur. He was fitted with an internal fixation back in Syria - a metal rod that holds the different parts of his fractured femur together.

Before he arrived in Azraq camp and met Handicap International’s teams, Mahmoud had never been given rehabilitation care, which is why he still finds it very hard to walk, three years after his accident.

Deprived of physiotherapy treatment, and highly restricted in his movements as a result, he was unable to work in Syria and meet his family’s needs. Since he arrived in Azraq, Mahmoud has been given follow-up care by Handicap International once a week and, slowly but surely, he has been making progress.

Mahmoud’s wife has been assigned as his care-giver. A vital link in the rehabilitation chain, she helps Mahmoud complete everyday tasks and, between rehabilitation sessions, assists him as he does the daily physical exercises recommended by Handicap International. For Mahmoud, any trip outside his shelter is a major challenge, especially fetching water and walking for 30 minutes on Azraq camp’s rocky ground.

Mahmoud would like to be able to live nearer the water collection point.  Once his health has improved, he would like to leave the camp and find work.