Since March 2016, Handicap International has worked with almost 20,000 people raising awareness of small arms and light weapons and explosive remnants of war in northern Mali.   This awareness-raising campaign will continue for another year. The objective is to reduce the very high number of accidents in this region of the country where weapons are commonplace following the intense fighting that took place in 2012-2013. 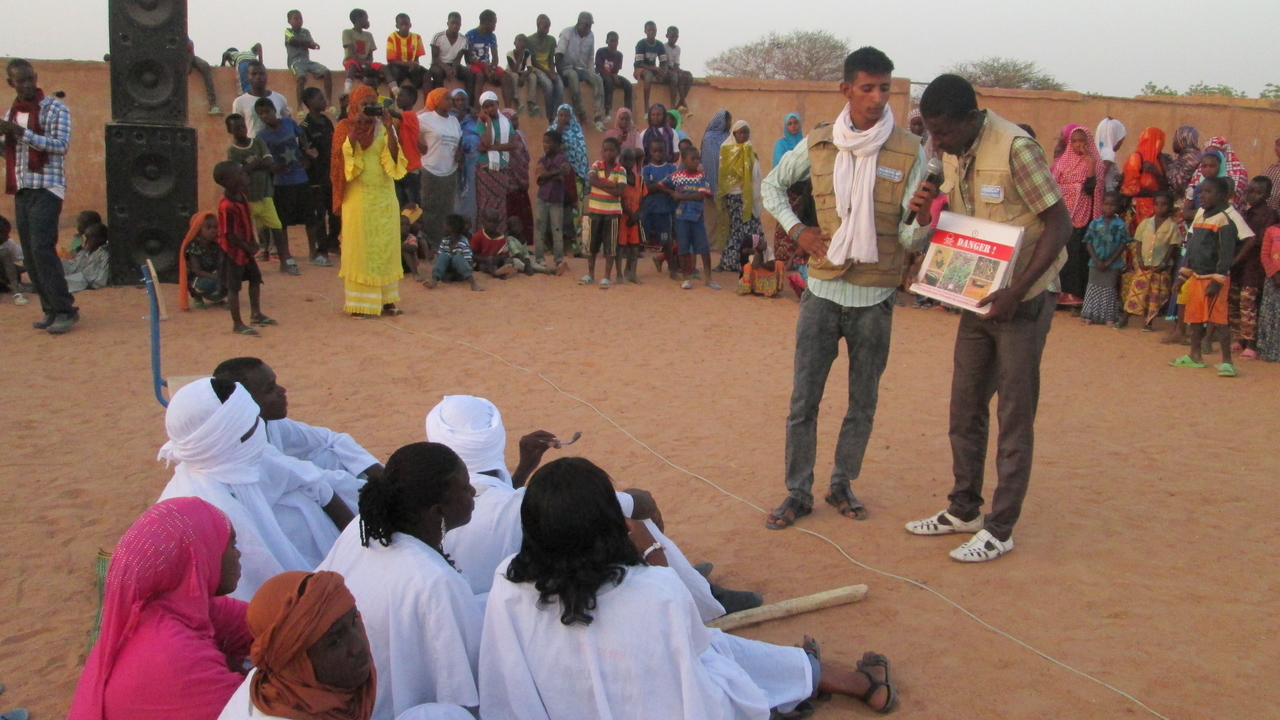 Sessions to aware population to the risk posed by explosive remnants of war and small and light weapons in villages of the Gao region in North Mali. | © Handicap International

Teams of two or three facilitators go from village to village. They gather the inhabitants together and for one hour use a picture box (a kind of picture book with captions) to explain the threat posed by firearms and explosive remnants, and demonstrate what action people need to take to protect themselves.

"The inhabitants are often unaware of the threat a weapon might pose," explains Pascal Mvogo, the Armed Violence Reduction Project Manager. A villager recently found a grenade next to his house. He kept it under his bed. When you find a weapon you need to report it to the authorities. As for the explosive devices left behind after fighting, they are not always instantly recognisable. A booby trap can look like a can of tomatoes. You must never pick up an object unless you know exactly what it is."

In the regions of Gao, Kidal and Timbuktu, Handicap International has identified 70 new victims of accidents caused by small and light weapons or explosive devices between March and May 2016.

In this region of the country, everybody carries a weapon, including the children. It is difficult to persuade the men to give up their weapons which are seen as a sign of virility. They also have a monetary value which means they are reluctant to separate with them.

Although they generally do not directly approach people carrying firearms, in order to avoid the tensions which can arise when interacting with someone who is armed, the facilitators do work with their families and friends. They also warn adults about the dangers of children handling weapons, it is important that they do not consider this to be a normal state of affairs. it is the adults who need to explain the situation to the boys carrying weapons, to inform them of the dangers and ensure they hand their weapons over.

The risk education sessions also teach people to reassure and provide first aid for the victims of explosive remnants: they should not rush towards the victim as there is always the risk of there being another explosive device nearby. It is important to speak to the victim and reassure them.  It is up to the professionals to take the necessary action.

Handicap International previously carried out demining operations in 2013 in the Mopti, Segou and Timbuktu regions of Mali.

Handicap International implements mine, explosive remnants of war, and small and light weapons risk reduction programmes in twenty countries. The organisation works in particular with vulnerable populations - including people with disabilities, the elderly and children etc. - refugees and displaced persons, and more generally with anybody at risk from these weapons.  Handicap International aims to improve the populations' capacity to limit at-risk behaviours by running awareness-raising campaigns, mediation programmes in conflict situations, and risk management programmes involving the identification and mapping of affected zones and the implementation of alternative solutions for the communities impacted.

Our work in
Mali
Where your
support helps
Worldwide actions