Violence in the Gaza strip continues to reach extremes. Humanity & Inclusion (HI) teams help to evacuate vulnerable populations and are prepared to care for wounded civilians. 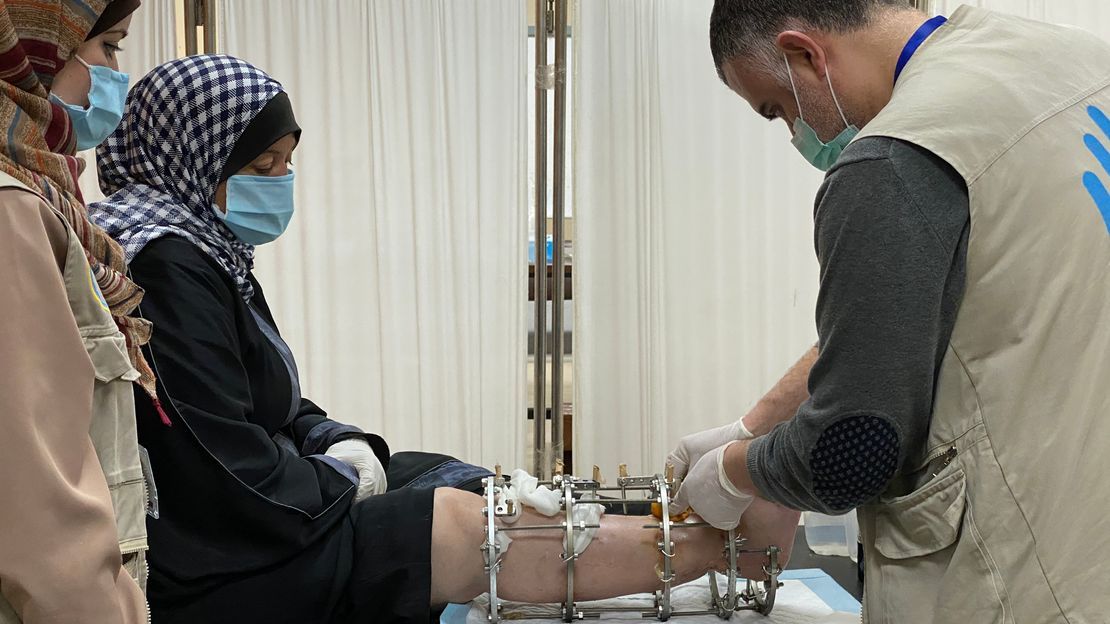 HI staff treats the wound of an injured woman in Gaza in 2020. | © Ibrahem ElShatali / HI- Archives

Ongoing bombings in the Gaza strip have escalated, resulting in devastation for vulnerable civilians on both sides of the conflict. Laurent Palustran, HI country manager on-site explains, “Over the last few days the bombings have increased in terms of violence. They are stronger and importantly they’re in areas with a lot of civilians.”

As of May 16th, the United Nations has reported nearly 200 deaths, including over 40 children between six months and 17 years old.

As the death toll climbs, so does the number of wounded. More than 1200 injured civilians are quickly filling local hospitals for urgent care, and will soon be discharged still in need of rehabilitation and psychological support. HI rehabilitation specialists are equipped to intervene on-site in support of those wounded by these horrific events. This is done in an immediate effort to prevent prolonged disability for affected civilians by providing ongoing wound care and mobility aids such as crutches, wheelchairs and walkers.

Increased deterioration and damage to the local infrastructure has left the Gaza strip’s over 2 million inhabitants with limited access to food, water or basic hygiene supplies, thousands of which have been forced to evacuate their residences entirely and seek shelter, primarily in schools.

“Older people, children and people with disabilities are met with great difficulty when they must evacuate, register at the shelter or access food and water,” says Laurent Palustran. “For a person with a disability or an older person, waiting in line for these goods can be particularly difficult. HI teams are taking action to assist such vulnerable populations with their evacuation and then bringing them to shelters.”

To further meet the basic needs of thousands who have lost nearly everything, HI is preparing for the distribution of hygiene kits and food vouchers.

Given the persistence and scale of ongoing bombings, HI has also expressed concerns about the risk that explosives can pose long after attacks, particularly in such a densely populated region. The Gaza strip is considered one of the most densely populated regions in the world. Dangerous shrapnel and dormant munitions leftover from warfare present a continual threat to civilians, most notably children. This may necessitate risk education action in the weeks or months following armed conflict.

“Vulnerable populations are the ones met with the most difficulty,” Laurent Palustran concludes. “It is therefore absolutely necessary to provide assistance for these people. They have already been in a chronic crisis situation for years and are still seeing the destruction of their surroundings today.”