Hurricane Matthew: Handicap International is responding on all fronts

As Handicap International’s emergency teams travel to the areas worst affected by Hurricane Matthew to supply aid to victims, an air cargo of humanitarian equipment was scheduled to land in Port-au-Prince on Wednesday evening. With access to the southwest of the country still unreliable a week after the disaster, Handicap International is organising the transport of aid by sea. 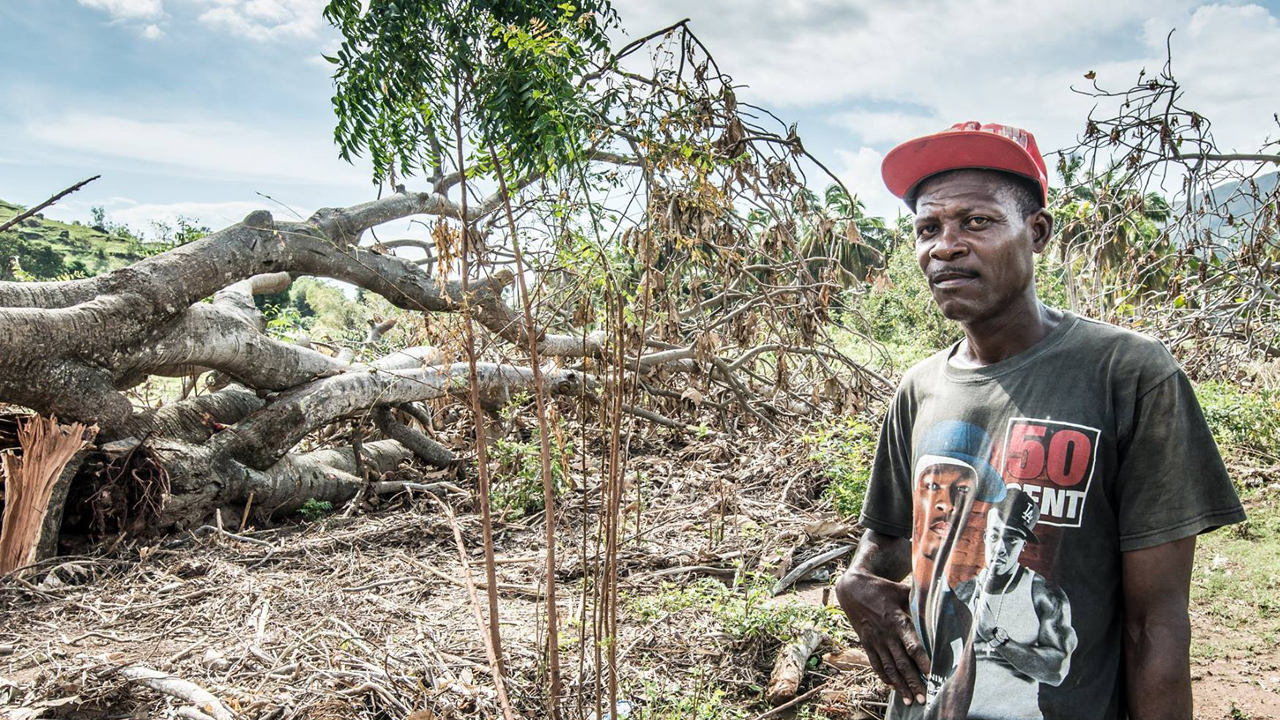 The villages of Saint-Louis-du-Sud and Cavaillon, near Les Cayes (the main city of sud province) have lost their harvests. Jean-Claude has lost his entire manioc crop. | © B.Almeras / Handicap International

The main road between Port-au-Prince and Jérémie, the biggest city in the southwest of Haiti, which was hit hard by Hurricane Matthew, remains impassable for lorries.

So we are going to organise the transport of humanitarian aid by local carriers with boats. This will enable humanitarian organisations working in isolated regions to receive their supplies of equipment and to distribute them without waiting for roads to reopen.

The organisation’s emergency team travelled to the southwest of Haiti on Tuesday to implement this response.

Another team is scheduled to leave tomorrow with a supply of mobility aids before making the first distributions to people with disabilities or injuries, who have lost everything in the disaster. Composed of a physiotherapist and a social worker, this team will assess the capacities of health centres and hospitals to determine the support they need. At the same time, Handicap International is also preparing to mobilise physiotherapists trained in Haiti to provide support in hospitals in the southwest, where the largest number of casualties is being treated.
This Wednesday, the organisation is expecting to receive more than 15 cubic metres of mobility aids by plane from its contingency stores in Dubai.

Handicap International plans to conduct an assessment in the northwest of Haiti, an area also severely affected by the hurricane, in order to identify the needs of the most vulnerable people.
A dozen emergency specialists are now providing support to Handicap International’s usual team of more than one hundred people in Haiti. A psychosocial project manager arrived in Porte-au-Prince this Wednesday evening to help victims recover from their trauma.
According to the United Nations, some 2.1 million people have been affected in the departments of Grand’Anse, Sud, Nippes, Sud-Est, Artibonite and Nord-ouest. And almost 13% of the country’s population still needs immediate assistance.

Handicap International launched its operations in Haiti in 2008 when it implemented a logistics platform in response to the devastation caused by two typhoons. During the earthquake of January 2010, the organisation mounted one of the biggest emergency operations in its history, mobilising up to 600 people in Haiti to supply aid to casualties and vulnerable people. Since then, the organisation’s teams have continued their actions in aid of the people of Haiti.