Humanity and Inclusion runs an inclusive education project in Gaza, in the Palestinian Territories. Shahed, 14, has cerebral palsy and is provided with personalised support by HI, which also assists her family. Shehad, 14, lives in Gaza. She has cerebral palsy. HI provides support to her and her mother, Heba, at a special school partnered by the organisation.

Support to children and their families

Shahed was seven months old when her mother, Heba, noticed changes in her baby. When she was diagnosed with a form of cerebral palsy, it came as a complete surprise to Heba, and she experienced a lot of anxiety. Heba was immediately invited to attend HI’s disability awareness sessions; she also joined a support group and saw a psychologist, who helped dispel the young mother’s feelings of guilt.

During awareness sessions, parents are guided through their child's academic career and learn how to manage disability issues. "Before the sessions, I used to go to the school psychologist for the slightest problem, hoping she could sort it out. Now, I’ve learned to cope on my own. I have the skills to support my daughter, and it’s had a knock-on effect on the rest of the family. They have a much better relationship with Shahed now," says Heba.

Heba has also been given stress management training to reduce her anxiety. The way she sees her daughter's disability has changed, which has helped integrate Shahed into their circle of family and friends. “I’ve learned to accept my daughter’s disability. I used to prefer her to stay at home. But now I make sure my daughter is with me, meets people and takes part in activities," Heba adds.

The challenge of inclusion

There are still obstacles to including Shahed in society: certain services remain difficult to access and some people are not sufficiently aware of disability issues. “This is particularly challenging when Shahed has health problems. I find it difficult to communicate with medical staff because they are not used to managing cases of cerebral palsy. People aren’t very tolerant towards disability either. Some doctors even refused to see my daughter for a consultation," Heba explains.

The project’s psychosocial component has helped Shahed and her mother break out of their isolation. The teenager has started to see the school psychologist. Since the sessions began, Shahed spends more time with other students. She now prefers to play with her classmates, rather than alone. Heba attends a support group for other mothers of children with disabilities. “I’ve learned a lot from listening to their experiences. It's a unique opportunity to be surrounded by other parents.

We stay in touch and I no longer feel alone," 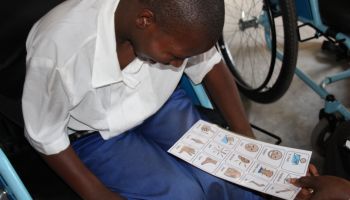