“We had to start from scratch”

Two years ago, Sarmad had to have his leg amputated after he was injured in an attack in Jalawla, Iraq. Months later, his family fled when the Islamic State group captured the city. Early this year, Sarmad and his relatives finally returned home. Handicap International now provides this young father with physiotherapy care and psychosocial support. 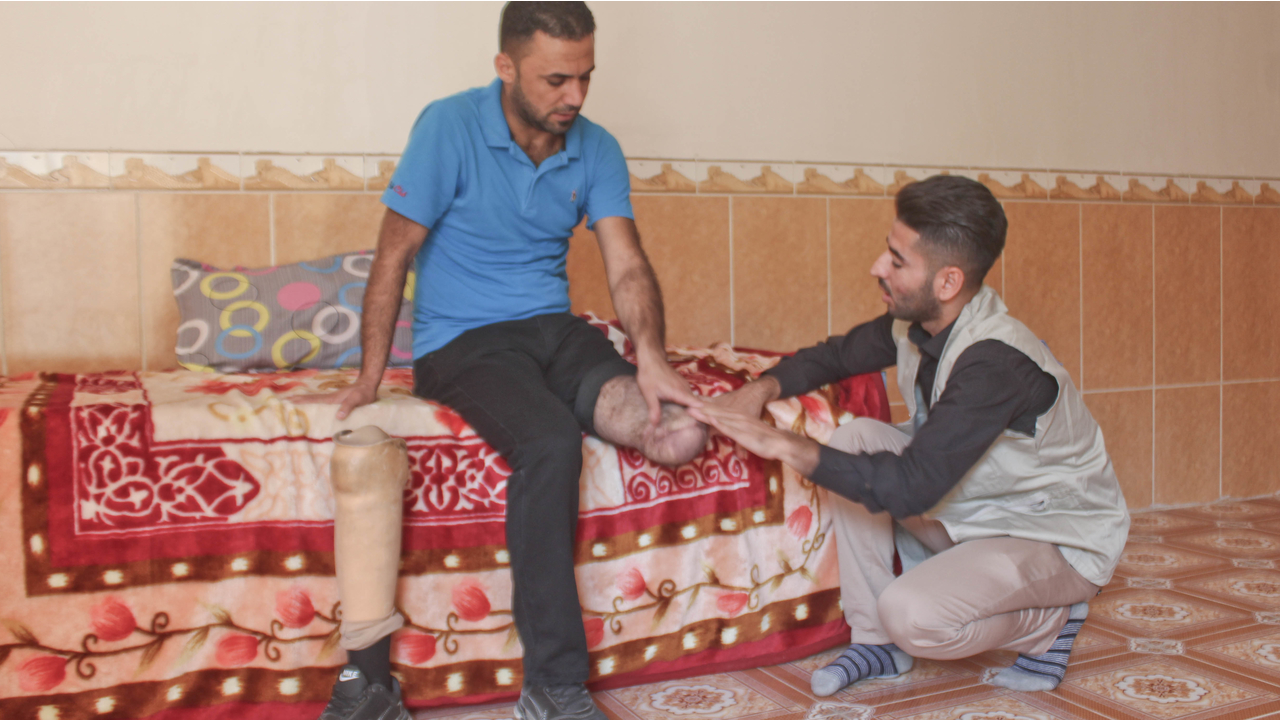 In the neighbourhood of Al Wahda, one of the worst hit in Jalawla, only a few have returned home. Many houses have been destroyed and the walls are pockmarked with bullet holes. Sarmad is standing in the middle of desolation. He smiles and invites Handicap International’s team into his living room. The room is empty apart from a bed donated by Handicap International, a few weeks ago. The young father sits on it as he tells his story.

“I was injured by a car rammed with explosives that ploughed into a group I was in. Dozens of local people came to help us and then a kamikaze blew himself up in the middle of the crowd. It looked like the apocalypse. I was trapped under the rubble for an hour. Then the ambulances arrived. My leg was so badly injured I was taken to hospital after hospital and operated on seven times in twenty days. I was in so much pain I didn’t sleep. When I realised that the doctors had amputated my leg, I thought my life was over.”

While he was in hospital, Sarmad’s family called to tell him the Islamic State group had captured Jalawla. His relatives fled to another city and stayed there for more than a year. It was only in early 2016 that the authorities told them they could go home. “When we arrived at our house, there was nothing left. They had stolen everything, the windows and doors were broken, there was no electricity. Only the walls were still standing. We had to repair everything and start from scratch.”

“He was depressed because his prosthesis hurt him and he couldn’t work. We immediately spoke about him with his doctors and got his prosthesis changed. Since then, I’ve seen him regularly for muscle-strengthening exercises and we gave him crutches, a bed and a toilet chair to make life easier,” adds Shvan, the organisation’s physiotherapists.

Sarmad has made a lot of progress. He has been fitted with a new prosthesis and can walk again. A few weeks ago, he started working and he’s happier. “I go out and I’m not ashamed of my amputation anymore,” he says. “Jalawla’s economy is still badly affected by what has happened, but simply going back to work and being head of the family again has helped a lot.” Sarmad takes his son, Anas, born a few months ago, in his arms. “I don’t say much but I’m constantly afraid for him,” he admits. “I’m afraid what happened to me will happen to him. Things are so unstable. I only want one thing now: I want all these conflicts and divisions to end so we can feel safe again.”