Since last January, HI and its partner Mobility Robotics have been trialing the use of drones to support weapons clearance experts in Faya-Largeau, northern Chad. 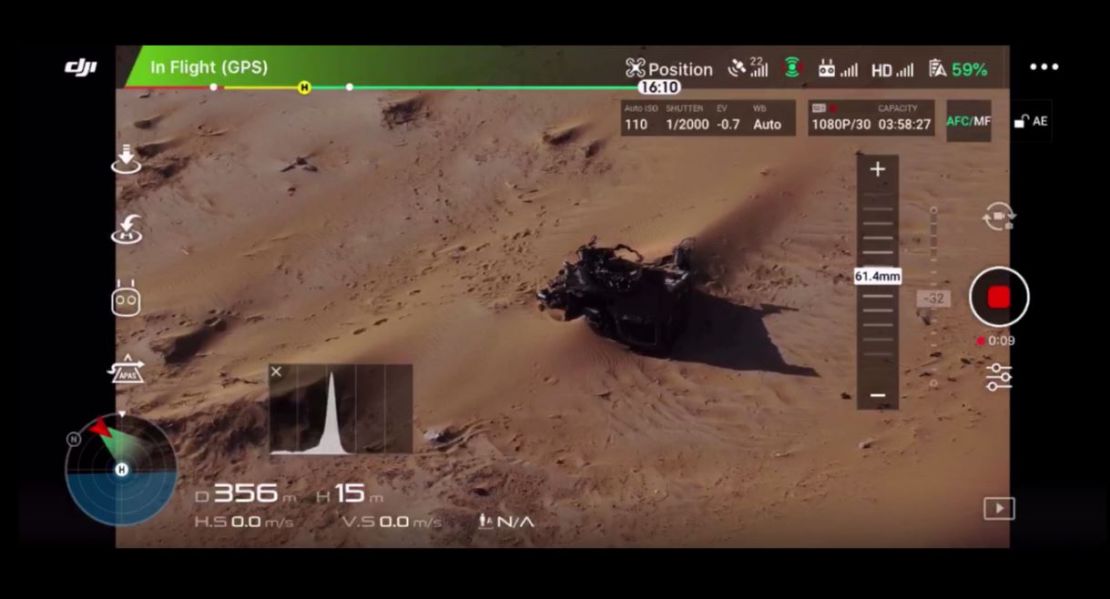 View from the drone on an Ipad | © HI

The drone is flown over an area suspected as contaminated with explosive remnants of war to provide weapons clearance experts with aerial images and detailed information on the topography of the area, including slopes, sand dunes and rocks. Although these land features are not always visible from a distance at ground level, they can pose major problems for weapons clearance experts: the weapons clearance platform used by HI in Chad[1], for example, must avoid outcropping rocks; if the slope is too steep, it may not be possible to remotely control the machine. For the person operating the remote control, this is valuable information.

The drone can also locate the shell of a tank or car, and munitions or craters in the ground that may suggest an impact or explosion. The weapons clearance experts use these images and geolocation data and their experience to decide what happened: "At a certain location, a team of deminers recognized what appeared to be an abandoned mine clearance site that no one in Faya could remember," explains Kheira Djouhri, HI's Innovation Project Manager in Chad.

The drone also maps entire areas by flying over the land in question and taking photos every two metres. The photos are then assembled and give a precise map of the future field of operations. This type of document helps weapons clearance experts to understand where they are going and to organize their work, especially in regions such as northern Chad, for which very few maps exist.

The drone makes a decisive contribution to what deminers call the "non-technical survey": the pre-clearance phase when teams collect as much information as possible on an area identified as contaminated and its nature. This information can be compiled in official documents and maps or collected during interviews with the authorities or older people who may know what happened 20 or 30 years ago. The non-technical survey is sometimes an actual police investigation.

During this phase, before weapons clearance experts start work, the aerial views and maps produced by the drone make it possible to specify the areas where they need to work, which should get priority or be ruled out because there is no sign of a risk of contamination. "Recently, in an area that we surveyed for a partner, the drone spotted fresh tyre tracks that suggested the road is regularly used by locals, whereas we strongly suspect it is contaminated, so we have made it a priority for the weapons clearance teams," explains Kheira.

From next July, the drone will be officially integrated into HI's weapons clearance operations in Chad. Some ten people will be trained to use it. HI and its partner Mobility Robotics will also experiment with the use of a thermal camera mounted on a drone to detect differences in temperature, such as between a mine protruding from the ground and its environment.

These mine clearance operations restore the use of tracks and land to local people, who can grow crops and rear livestock again. This will open up the Faya-Largeau region, which has been slow to develop due largely to explosive remnants of war.

[1]The weapons clearance platform, GCS 200, is a kind of one-tonne combine harvester. Remotely controlled, its front rotating arms detonate all explosive devices in its path.